Hyundai has unveiled its Ioniq 5 all-electric crossover; the first in its new Ioniq sub-brand. 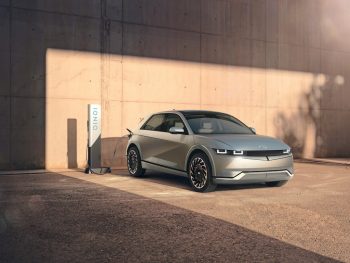 Due mid-2021, the Ioniq 5 midsize crossover will rival electric vehicles such as the Tesla Model 3/Y and the Volkswagen ID.3/4.

It’s built upon the Hyundai Motor Group’s Electric-Global Modular Platform (E-GMP) dedicated BEV architecture, which will also be used for future models such as the Ioniq 6 saloon/sedan and the Ioniq 7 large SUV and enables sector-first solutions such as 800V charging capability as standard.

Two battery pack options are on offer – either 58kWh or 72.6kWh – along two electric motor layouts, either rear-wheel or all-wheel drive. Range is expected to be around 470km in 2WD form and all models have a top speed of 185km/h.

Thanks to the platform, the Ioniq 5 provides a ‘vehicle-to-load’ function, which allows charging of electric devices, such as electric bicycles, supplying up to 3.6kW of power and effectively turning the crossover into a charger on wheels.

The interior includes eco-friendly, sustainably sourced materials and is based on the idea of a ‘Smart Living Space’, including the ‘Universal Island’ moveable centre console. It’s  dominated by a wide, configurable, dual cockpit with a 12-inch, full-touch infotainment screen and 12-inch digital gauge cluster.

The Ioniq 5 will also be the first Hyundai to feature an augmented reality head-up display and will also introduce the latest Hyundai SmartSense advanced driver assistance system. It will also debut the brand’s Highway Driving Assist 2 tech.