Toyota has revealed its 2020 C-HR crossover, which brings a host of updates, including the introduction of a more powerful hybrid model. 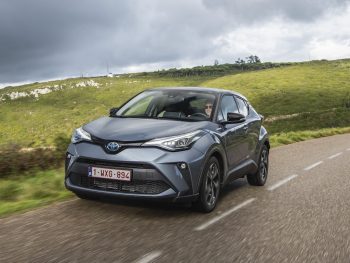 In line with this, the updated model follows the new Corolla in adopting Toyota’s dual hybrid strategy, giving customers the choice of a new-generation 1.8-litre hybrid system or a more powerful, all-new 2.0-litre powertrain.

The new 2.0-litre system produces 184hp – up 50% compared to the 122hp 1.8-litre hybrid – with CO2 emissions from 118g/km (WLTP) and uses an all-new petrol engine that achieves a maximum thermal efficiency of 41% – said to mark the world’s highest level for a mass-produced engine – increasing its efficiency. As a result, consumption only increases by 10% compared to the smaller hybrid despite the 50% uplift in power.

It also brings updated suspension and improved NVH, improved ride and new levels of driving dynamics, according to Toyota.

Meanwhile the 1.8-litre hybrid is now equipped with a smaller, lighter and more powerful lithium-ion battery pack while maintaining its 109g/km emissions (WLTP).

The 1.2 litre turbo can be married up to either a six-speed manual gearbox or a CVT, the latter available with either front- or all-wheel drive.

And finally, a 148hp 2.0-litre CVT-only model will be available for Eastern European markets.

Other changes bring minor front and rear styling updates while the adoption of Toyota’s 2019 Multimedia system now allows full smartphone integration through both ‘Apple CarPlay’ and ‘Android Auto’. Additionally, this system facilitates ‘Over The Air’ map updates to the navigation platform, with Toyota providing a free three-year subscription for these updates, which are available every six months.