Nissan is readying for the spring launch of its third-gen Qashqai, which gets a new platform and design, its first-ever hybrid powertrain and latest driver assistance tech. 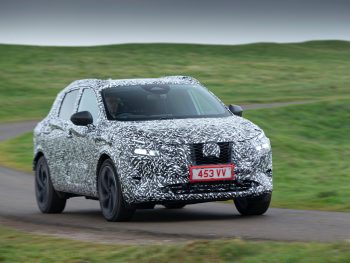 The new Qashqai has been revealed in prototype form for now

More than three million Qashqai have been sold across Europe since the first-generation model arrived in 2007, credited with creating the crossover segment. The new model, revealed in prototype only at this stage, is said again to raise the bar for the class.

As with the last two generations, the new Qashqai will be built at the Sunderland plant, while its design and engineering are also UK-led.

Currently undergoing testing in Europe, it’s built on the latest version of the Renault-Nissan-Mitsubishi Alliance’s CMF-C platform, which makes use of more lightweight material as well as new manufacturing techniques to increase strength but to also reduce weight. The result is that the new model is lighter by 60kg and 41% stiffer, said to bring increased refinement, ride comfort and driving response as well as safety and efficiency.

Efficiency, as you might expect, is also the focus for powertrains, and the new Qashqai gets its first hybrid engine. Details of the e-Power system are a bit thin on the ground for now but it will be a range-extender set-up, with the petrol engine not being used to power the wheels direct but instead to charge the battery. Nissan said that it will also be marked out from other hybrids by using a larger electric motor more typical of an EV. According to the carmaker, this will bring drivers the instant response of an EV but without the range anxiety.

No plug-in hybrid is planned for the range for now and there are no diesels at all; the sole other engine announced is a 1.3-litre petrol engine with 12V mild hybrid technology, which will be offered in two power outputs. As with the hybrid, full technical details will be announced by Nissan closer to launch but it has revealed that the full range will include all-wheel drive variants.

No dimensions have been revealed either but Nissan said it’s retained the Mk2 Qashqai’s proportions, which are “just right” and key in its success, enabling its use on urban roads and in tight parking spaces, while also giving excellent interior space. It also gets a flat floor.

Specification details will also be revealed later but we do know it will get 19- and 20-inch wheels, ‘Intelligent’ LED headlights that adapt to suit road conditions, and the next generation of Nissan’s ProPilot driver assistance from mid-level trims upwards.

This is dubbed ProPilot with Navi-Link and designed to bring greater semi-autonomous features, including adapting the car’s speed under the intelligent cruise control to allow for a lower speed limit zone and even to take into account new speed limit data from road signs. It also gives ‘flank protection’ warnings for urban situations, which alerts the driver of potential impacts on the side of the vehicle, such as in parking spaces.

The new Qashqai arrives in spring 2021.