Mercedes-Benz Vans and US technology start-up Via are introducing on-demand ridesharing to Amsterdam through their ViaVan joint venture. 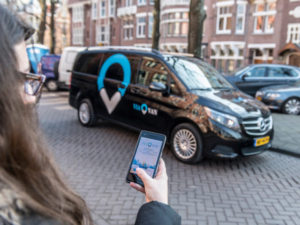 On-demand ridesharing has been introduced in Amsterdam by Mercedes-Benz and Via: ViaVan

The city marks the first deployment of the scheme ahead of launches in Berlin and London this year, along with other cities depending on final approvals.

The scheme makes use of existing professional drivers  in addition to future plans to incorporate Mercedes-Benz vans into the fleet. Vehicles can be hailed through the ViaVan app. Using Via technology, this will match up passengers with other travellers heading their way and direct them to a nearby corner to serve as a pickup point. The plan is to “transport a high volume of passengers while using a fraction of the number of vehicles utilised by taxis or on-demand car services” and also cutting down on congestion and emissions. Rides within the central city zone will cost a flat rate of €5.

“ViaVan’s mission is to power truly dynamic mass transit systems, liberated from the constraints of fixed routes and fixed schedules,” said Chris Snyder, CEO of ViaVan. “We believe the future of urban transportation is the sweet spot between inflexible fixed route transit service and expensive private car services. Our technology has powered more than 30 million shared rides around the globe, and we’re delighted to launch in Amsterdam, one of the most vibrant and exciting cities in Europe.”