The BerlKönig ride-sharing service in Berlin has won the UITP title in the Public and Urban Transit Strategy Service category at the World Association of Public Transport Companies. 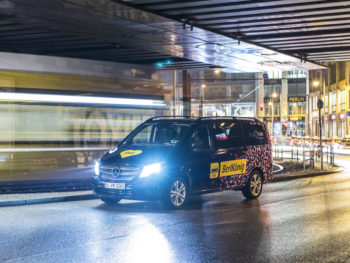 Since its launch in September 2018, more than 650k shared rides have been provided by the BerlKönig ride-sharing service

The service is operated by Berliner Verkehrsbetriebe (BVG) in partnership with the ViaVan joint venture operated between on-demand public mobility company Via and Mercedes-Benz Vans in Europe.

Launched in September 2018  the BerlKönig serves as a complement and extension to existing public transport in Berlin. The fleet, mainly comprising electric vehicles, has provided more than 650,000 shared rides while reducing vehicle miles travelled by more than 143,000 km as compared to private vehicle trips.

“ViaVan’s powerful algorithms were developed to provide the efficiency and convenience of a personal vehicle while delivering the congestion and emission reducing properties of public transit,” said Chris Snyder  CEO of ViaVan.

“We are honoured that UITP has recognised the impact that smart shared solutions like BerlKönig can have to reduce single-occupancy vehicles on the roads when integrated into the public transport system.”