BMW starts on-road testing of i Hydrogen Next SUV

BMW has started to test prototypes of its i Hydrogen Next SUV in real-world conditions, paving the way for series production in the future. 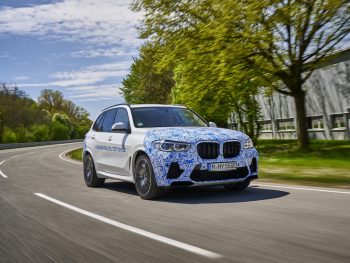 BMW i Hydrogen Next SUV

Essentially, a hydrogen fuel cell version of the X5, the i Hydrogen Next was first revealed at the Frankfurt Motor Show in September 2019 and is a pure electric vehicle that uses hydrogen as fuel by converting it into electricity in a fuel cell.

It combines hydrogen fuel cell technology, drawing on the carmaker’s tie-up with Toyota, along with fifth-generation BMW eDrive technology, already seen in the iX3. The resultant 374hp power output is exactly the same as the brand’s most powerful six-cylinder in-line petrol engine currently used in BMW models but the only emissions are water vapour.

This will then enable BMW to develop a small-series model in late 2022.

The carmaker has said for some time that various alternative powertrain systems will exist alongside one another in future, and that hydrogen fuel cell technology has the long-term potential to supplement internal combustion engines, plug-in hybrid systems and battery-electric vehicles within the group’s flexible drivetrain strategy.

In particular, it could prove an attractive alternative to battery-electric drivetrains – especially for customers who do not have their own access to electric charging infrastructure or who frequently drive long distances. As with a conventional combustion-engine model, the hydrogen tank of the i Hydrogen Next can be refuelled within three to four minutes, giving several hundred kilometres of range in all weather conditions.

Head of development Frank Weber said: “Hydrogen fuel cell technology can be an attractive option for sustainable drivetrains – especially in larger vehicle classes. That is why road testing of near-standard vehicles with a hydrogen fuel cell drivetrain is an important milestone in our research and development efforts.”

BMW i Hydrogen Next SUV