BMW has revealed its iX3 SUV; its first-ever fully electric SUV and a core part of its electrified model offensive. 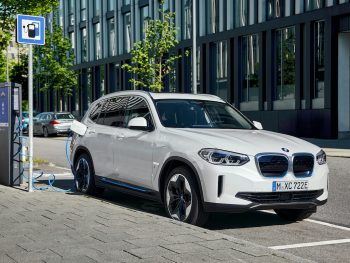 First announced in two years ago in the brand’s EV plans, the iX3 rivals electric SUVs such as the Model X and will offer a 460km range with the help of the company’s fifth-generation eDrive technology.

The iX3 will be sold in various global markets – it’s the first model to be built for export at the Shenyang plant in China, which is operated by the joint venture BMW Brilliance Automotive. Rollout starts in China later this year and Europe next summer.

Building on the 2013 market launch of the BMW i3, the brand’s first fully electric model, the eDrive system is now in its fifth-generation and has been overhauled with an updated electric motor, power electronics, charging technology and high-voltage battery to up the ante on performance and range. The system will also be used as the basis for BMW iNext and BMW i4 models from 2021.

Power for the rear-wheel driven only iX3 stands at 286hp with peak torque of 400Nm. The 0-100km/h time is 6.8 seconds, putting it on a par with the conventionally powered BMW X3 xDrive30i. Top speed is electronically limited to 180km.

AC charging can be carried out using both single-phase and three-phase charging at up to 11kW. DC rapid charging speeds of up 150kW are available, giving a 0-80% capacity charge in 34 minutes.

The battery is positioned low down in the underbody, with the car’s centre of gravity lowered by around 7.5cm compared with its conventionally powered BMW X3 siblings to benefit lateral dynamics. The iX3 also comes with standard adaptive suspension that includes electronically controlled dampers; Adaptive M suspension is available as an option. It also gets the ARB traction system introduced in the BMW i3.

The new cloud-based BMW Maps navigation system brings enhanced calculations of route and arrival times and services from the BMW i3 are carried over, such as navigation with range display on the map and detailed information on public charging stations, joined by additional functionality such as navigation planning with recommendations for charging stops, information on points of interest near public charging stations and the ability to filter search results by fast-charging points.

Bespoke design features compared to conventionally powered X3 models include a blanked-off front grille and blue interior and exterior badging as well as aerodynamic revisions, including the addition of 19-inch alloys.

Technologies include the standard-fit BMW Live Cockpit Professional with a 12.3-inch instrument cluster behind the steering wheel and a 10.25-inch central display with touchscreen. Drivers can also use the iDrive Controller, multifunction buttons on the steering wheel, voice control or BMW gesture control. Both Android Auto and Apple CarPlay integration are available.

The BMW iX3 is also equipped with the new-gen BMW Operating System 7 – which allows for every line of software code in the car to be updated over the air in the future – and the latest version of the BMW Intelligent Personal Assistant.