By Jonathan Musk / 1 week ago / News / No Comments

Further information and technical details of the all-new Citroën C4 and electric ë-C4 have been revealed. 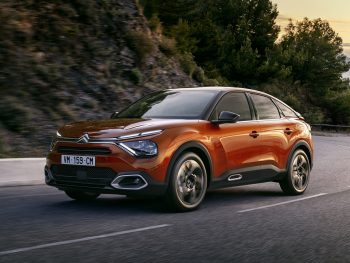 The new C4 has been redesigned in a more on-trend SUV manner, and is available with electric, diesel and petrol powertrains.

Top of the spec list is the new electric ë-C4’s 350-kilometre range from its 50kWh battery, that can be recharged at up to 100kW on a compatible CCS rapid charge point – meaning a 0-80% charge takes around 30 minutes. Plug in to a 32A wallbox and that time increases to 7.5 hours, although support for three-phase 11kW supplies as found at businesses in particular reduce that time to 5 hours, so well within a working day.

The car is powered by a 136hp electric motor, which is enough to propel the electric car from 0-100km/h in 9.7 seconds, onto a top speed of 150km/h when in Sport mode. The new ë-C4 also features a “Brake” setting, which offers regenerative braking and therefore single-pedal driving to an extent as well as some energy recuperation. Several driving modes are available, activated by the mode selector on the centre console: Eco, Normal or Sport.

Although there were no market-specific announcements made, the new car is said to come with a host of clever design functions, including a smart pad support – which is a bit like a van’s laptop table – that pops out from the dashboard and can be used even when on the move to hold a tablet device.

Citroën’s executive VP, Vincent Cobée, said that there were no plans as yet to launch an estate model C4, while the C4’s platform also doesn’t support a plug-in hybrid option and so this too is not on the table. Interestingly, he conceded that only 10% of sales are expected to be for the ë-C4 electric model.

The details follow an earlier reveal two weeks ago, as well as the C5 Aircross Hybrid, Ami, ë-SpaceTourer and ë-Dispatch to form part of Citroën’s plans to launch six electrified vehicles this year.