Kia has outlined initial details of its global engine line-up for the fourth-generation Sorento SUV, which launches in the autumn. 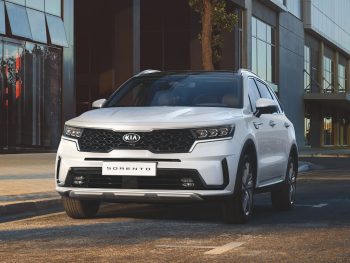 Revealed earlier this week and making its debut at next month’s Geneva Motor Show, the seven-seater Sorento will be the first SUV to be based on Kia’s new platform, featuring a more upmarket design with the help of shorter overhangs and a longer wheelbase. It’s claimed to offer more room than many other competitor SUVs, which include the Peugeot 5008 and Skoda Kodiaq, and class-leading boot space – exact figures are still be revealed.

Launch line-up has now been confirmed to offer a new turbo hybrid powertrain in Korea, Europe and North America. This marries up a 1.6-litre T-GDi turbo petrol engine with a 60hp electric motor – giving a total 230hp output – and a 1.49kWh lithium-ion polymer battery pack.

Drivers in Korea and Europe will also have the option of a new 202hp four-cylinder 2.2-litre  diesel engine, paired with Kia’s new eight-speed wet double-clutch transmission (8DCT), said to bring the smooth shifting characteristics of a conventional automatic while enhancing efficiency over dry-clutch DCTs.

A plug-in hybrid variant will follow along with other powertrains, with details yet to be announced.

Further new features of the Sorento include Kia’s first Multi-Collision Brake system, which automatically applies vehicle brakes when the airbags have been deployed after an initial collision, helping to protect occupants from secondary frontal or side impacts. Depending on the market, the Sorento will also offer a total of eight airbags, including front seat centre side airbags and knee airbags.

Previous: MaaS Appeal: How Mobility as a Service is changing the face of fleet
Next: Commercial vehicle road safety challenges revealed in new IRU report