New contactless touchscreen technology that could reduce the spread of bacteria and viruses while also tackling driver distraction has been developed by Jaguar Land Rover. 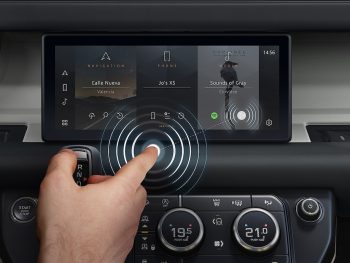 Designed in partnership with the University of Cambridge, the patented ‘predictive touch’ system uses artificial intelligence and sensors to predict a user’s intended target on the touchscreen – whether that’s satellite navigation, temperature controls or entertainment settings – without touching a button.

A gesture tracker uses vision-based or radio frequency-based sensors – increasingly common in consumer electronics – to combine contextual information, such as user profile, interface design and environmental conditions, with data available from other sensors, such as an eye-gaze tracker, to judge what the driver wants to do and carry it out in real time, speeding it up.

By eliminating the need to touch an interactive display, the technology could therefore reduce the risk of spreading bacteria or viruses on surfaces.

But it could also help keep drivers’ eyes on the road; the lab tests and on-road trials have revealed the time and effort needed to use a touchscreen can be reduced by up to 50%.

Driver distraction is already a prime focus for road safety; the Department for Transport’s road policing review, which was announced this month and will explore ways of reducing road casualties and deaths after a plateau in recent years, includes a call for evidence on in-car technology and how this could be increasing accident risks alongside reducing them.

JLR’s predictive touch system is being worked on as part of the carmaker’s Destination Zero vision – a desire to make its vehicles safer and the environment cleaner and healthier – and can be retrofitted to existing touchscreens and interactive displays, so long as the correct sensory data is available to support the machine learning algorithm.

Professor Simon Godsill from Cambridge University’s Department of Engineering said: “Touchscreens and other interactive displays are something most people use multiple times per day, but they can be difficult to use while in motion, whether that’s driving a car or changing the music on your phone while you’re running. We also know that certain pathogens can be transmitted via surfaces, so this technology could help reduce the risk for that type of transmission.”

Previous: Ebbon-Dacs platform brings live view of vehicle stock and sales
Next: Advice on reshaping fleets for the new normal