Kia has provided its latest teaser on its forthcoming XCeed urban crossover, which it says will feature a 12.3-inch fully digital instrument cluster when it launches later this year. 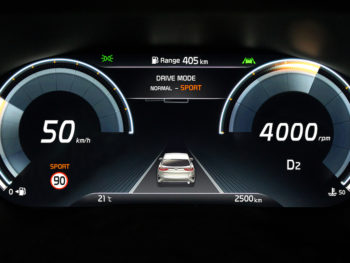 Due to be unveiled on 26 June 2019, the Volkswagen T-Roc rival is intended to one of the most technologically advanced compact cars when it goes on-sale. This includes the digital cluster – which debuts on the XCeed ahead of other Kia models and will be used to display critical information to drivers on the move.

The digital cluster replaces the conventional speedometer and tachometer dials found currently in the brand’s passenger cars and uses a high-resolution 1920×720-pixel display with digital dials for vehicle and engine speeds as well as a multi-function display. The latter is controlled via the multi-function steering wheel and provides satnav instructions as well as audio information, phone calls and contacts, and in-depth trip information.

This includes the Drive Mode Select system, where specified, with the instrument cluster displaying detailed information relating to each mode.

The multi-function central display also shows cues from the car’s Driver Attention Warning system, advising drivers to take a break if it detects signs of fatigue.

And it can also be used to provide in-depth information relating to electrified powertrains, including eco gauges, drive mode and trip information, and even a display of the flow of energy between batteries and electric motors; as such it will be introduced to the brand’s other mild-hybrid, hybrid, plug-in hybrid and electric vehicles in future.

When the driver parks and switches off the car, the new cluster also plays a short graphic of the car in motion, and displays a summary of the drive. This shows the time and distance driven, the average fuel efficiency achieved, and the estimated distance remaining based on current fuel levels.

The instrument cluster is available as an option, depending on market and vehicle specification, and replaces the physical dials and 3.8-inch mono-LCD or 4.2-inch colour TFT LCD screens available with different specifications of the car.

As announced earlier this month, the XCeed will bring a “sporty alternative to traditional larger SUVs”, and is said to offer comparable levels of interior space and luggage capacity to Europe’s best-selling SUVs.

UK on-sale date, specification and pricing will be confirmed in due course.