Mercedes-Benz plans to go all-electric by 2030

Mercedes-Benz has said it’s ready to go all-electric by 2030 while all new models will be electric-only by 2025. 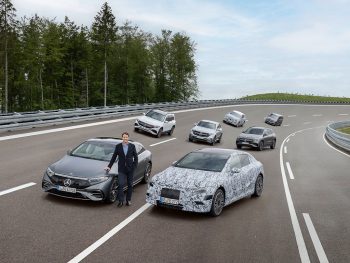 Ola Källenius, CEO of Daimler AG and Mercedes-Benz AG, said: “The tipping point is getting closer and we will be ready as markets switch to electric-only by the end of this decade.”

The plans, revealed today (22 July) mark a ramp-up of its electrification strategy and will be backed by new EV platforms and plans for gigafactories.

The carmaker said its strategy would shift from “electric-first to electric-only”. By 2022, it will have fully electric vehicles in all segments it currently operates in, targeting fast-growing demand, particularly in China.

From 2025 onwards, all newly launched vehicle architectures will be electric-only and customers will be able to choose an all-electric alternative for every model the company makes.

And it will go all-electric at the end of the decade, where “market conditions allow”.

Ola Källenius, CEO of Daimler AG and Mercedes-Benz AG, said: “The EV shift is picking up speed – especially in the luxury segment, where Mercedes-Benz belongs. The tipping point is getting closer and we will be ready as markets switch to electric-only by the end of this decade.”

It’s the latest commitment from an OEM to EV-only manufacturing; Ford and Volvo have said they will be fully electric by 2030 while Jaguar is to become an all-electric luxury brand from 2025. More recently, Audi has announced it go all-electric for new models from 2026 and Vauxhall/Opel by 2028.

Mercedes’ total investment in fully electric vehicles between 2022 and 2030 will amount to over €40bn (£34.3bn). This will include the development of three electric-only architectures, launching in 2025.

The MB.EA platform will cover all medium to large size passenger cars, establishing a scalable modular system as the electric backbone for the future EV portfolio.

But there will also be a dedicated AMG.EA performance electric vehicle platform, addressing technology and performance-orientated Mercedes-AMG customers.

Vans and light commercial vehicles will also be catered for via the VAN.EA platform, which “ushers in a new era”.

It will also enhance the efficiency of electric drivetrains through vertical integration and the acquisition of Yasa, a UK-based specialist in ultra-high performance axial flux motors.

The plans will require Mercedes-Benz to install a battery cell capacity of more than 200 gigawatt hours with partners and it’s looking to set up eight gigafactories around the world, in addition to its existing planned network of nine plants dedicated to building battery systems. And it’s planning new partnerships for development and production of battery cells in Europe.

Mercedes is also working on setting new standards in charging. Its ‘Plug & Charge’ service will go live later this year alongside the launch of the EQS and will allow customers to plug-in, charge and unplug without extra steps needed for authentication and payment processing. This will complement the Mercedes me Charge network, which currently comprises more than 530,000 AC and DC charging points worldwide; it’s also working with Shell on expanding the charging network.

Mercedes is currently developing the Vision EQXX, an electric car with a real-world range of more than 1,000km (621 miles), targeting a single-digit figure for Kwh per 100 kilometres (over 6 miles per Kwh) at normal highway driving speeds. The world premiere will be in 2022 and the technological advances made with the car will be adapted and applied for potential use in new electric architectures.

“Our main duty in this transformation is to convince customers to make the switch with compelling products. For Mercedes-Benz, the trailblazing EQS flagship is only the beginning of this new era,” Källenius said.