By Jonathan Musk / 6 months ago / News / No Comments

Five stars were awarded to the Ford Puma, MG ZS EV, MG HS, Nissan Juke, Volkswagen Golf and Audi Q8. Three stars were handed out to the Aiways U5, the Volkswagen up!, SEAT Mii and Škoda Citigo. 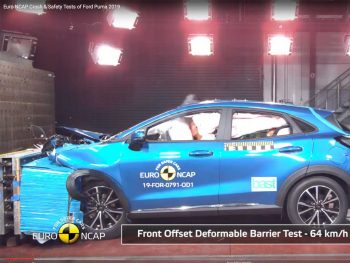 Marking it out as one of the safest cars in its class, the new Ford Puma scored a stellar result, with fives stars after scoring well in each of the Euro NCAP test categories. Joining it was the similarly-sized new Nissan Juke and MG ZS EV. Not only with MG’s first battery-electric vehicle score five stars, but its larger sibling the HS did too, proving a match for many European, Japanese or Korean models. The Volkswagen Golf also scored the full five star rating, particularly thanks to the inclusion of numerous technology-related safety mechanisms, such as the inclusion of V2X (vehicle to vehicle, vehicle to infrastructure) for the first time in a Volkswagen. This technology will soon be included in Euro NCAP tests. However, the Golf did suffer a door opening, which Volkswagen has said should not be the case on production models but is investigating nonetheless.

The large executive SUV also managed to score five stars, following on from the Q7 that also scored five stars a couple of weeks ago.

Fairing fewer stars were the recently revised Volkswagen up!, SEAT Mii and Skoda Citigo city cars, which each scored three stars. Part of the reason for this was the decision to drop AEB from the standard equipment, when compared to the models’ debut in 2011.

Also scoring three stars was Chinese startup’s Aiways U5. The SUV had problems in the side impact tests, losing all points for the side pole impact, and narrowly missed out on points for the pedestrian and cyclist functionality of its AEB system. This has capped the rating at three stars for the moment. Aiways has responded that they are already working on the weaknesses of the car and are hoping to re-submit the car for further evaluation in order to make the U5 one of the safest mid-size SUVs available next year.