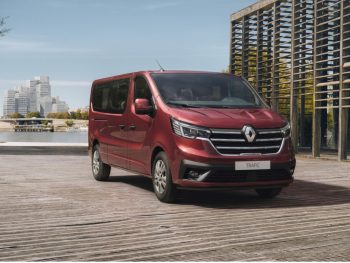 The Trafic Passenger offers seating for nine to cater for families and passenger transport professionals. The SpaceClass features an eight-seat layout and is focused on luxury-end business shuttle and VIP transport.

Both get a revised front-end with a bespoke bonnet, front grille and bumper, and standard LED headlights. SpaceClass models gain 17-inch diamond effect alloy wheels and the Passenger gets bespoke wheels. The models are available in seven different colours including the new Carmin Red metallic. Inside, there’s a new dashboard, revised dials and trims, along with 84 litres of storage space and up to 1,800 litres of boot space.

Engines cover three variants of the Renault 2.0-litre diesel – the dCi 110, new dCi 150 and the dCi 170, all featuring automatic stop and start.

A six-speed manual gearbox is standard on dCi 110 and dCi 150 models, while six-speed EDC dual-clutch automatic transmission features on both the dCi 170 and dCi 150.

A series of new optional packs will also be available, including a Prestige Pack, aimed at business and VIP travel and featuring two independent swivelling captain’s chairs, a bench seat replacing the third row seats, a reading light and leather interior throughout. A new Adventurer Pack features similar options with the addition of a third row of seats that can fold completely flat to form a bed.

Full details and prices will be announced in early 2021, ahead of the vehicle’s launch in March.