Euro NCAP has published its best-in-class cars for 2019, with Tesla putting in a notably strong performance. 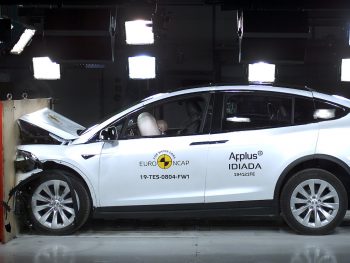 The list has been compiled from the 41 new models that earned Euro NCAP’s top five-star accolade last year, from a total of 55 cars tested.

The results show that Mercedes-Benz regained its crown in the best performing Small Family Car category with the CLA, which achieved a score of more than 90% in three of the four areas of safety and delivered the best overall rating of the year.

Tesla’s Model X was the 2019 winner in the Large Off-Road category, with the SEAT Tarraco in second place. The Tesla Model 3 is top of the ‘Electric and Hybrid’ vehicle class and, together with BMW’s 3 Series, shares top spot in the Large Family category. The two cars end up with identical overall scores, the BMW scoring better in pedestrian protection, and the Tesla edging it in Safety Assist. Škoda’s new Octavia is the runner-up in this category.

In the Supermini class the Audi A1 tied with the Renault Clio while the Ford Puma was runner-up.

Finally, the BMW Z4 was the only roadster tested in 2019 but was said by Euro NCAP to set a new safety benchmark for the segment.