Targa Telematics shows bounce back for Italian fleets in June 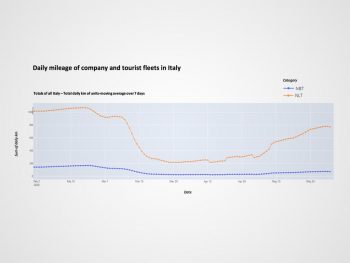 At its lowest point at the end of March, fleet usage dropped to just 2 million kilometres per day, Targa Telematics pointed out.

However, short-term rental fleets – which typically serve tourists in Italy – is still at a standstill with only 700,000 kilometres travelled per day in the last week against 1.6 million in February before the emergency started.

Nicola De Mattia, Targa Telematics CEO said, “Mobility is precisely one of the pillars on which we will build the restart of our economic and productive system, hoping for a highly opportune intervention in favour of the sector by the government, as has already happened in all major European countries”