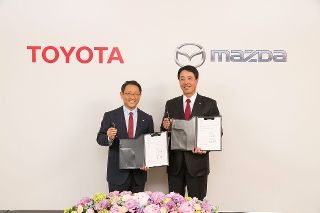 The two carmakers will establish a committee, which will establish how the company’s technological strengths will be shared out, but it is known that Toyota’s hybrid drive system will be licensed to Mazda. Mazda's plant in Mexico, where the Mazda2 is built, will also produce small models for Toyota.

Toyota President Akio Toyoda said: "Mazda has proven that it always thinks of what is coming next for vehicles and technology, while still managing to stay true to its basic carmaking roots. In this way, Mazda very much practices what Toyota holds dear: making ever-better cars.

“I can think of nothing more wonderful than showing the world―together―that the next 100 years of cars will be just as fun as the first."

Representing Mazda, President and CEO Masamichi Kogai said: "Toyota is a company that has shown steadfast resolve in acting responsibly on global environmental issues and the future of manufacturing as a whole.

“I hope that by working together to make cars better, we can raise the value of cars in the eyes of consumers while also enhancing the manufacturing capabilities of our home, Hiroshima, and all the communities we are involved in as well."