By Natalie Middleton / 5 days ago / News / No Comments

ACFO and ICFM have teamed up to create a single industry association, intended to give “increased voice through combined strength” to anyone with fleet responsibilities. 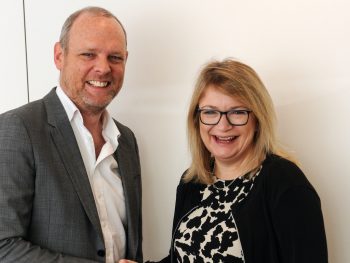 The Board will include Paul Hollick and Caroline Sandall, who currently serve as chairman of ICFM and ACFO respectively

Building on their existing collaboration, the organisations have created a single ‘Association of Fleet Professionals’ (AFP), which will oversee and unite ACFO’s strengths in industry campaigning and lobbying with the ICFM’s specialism in fleet operator/service provider training and education, to help fleets “deal with current and future challenges”.

As ‘the organisation for fleet professionals’, its services will be aimed at fleet decision-makers but also anyone with fleet responsibility working in HR, finance and procurement roles and the fast-emerging mobility function. Membership will also be targeted at companies supplying a wide range of services to fleets, who could gain from a range of benefits.

The Board will include the organisations’ current chairmen, Caroline Sandall (ACFO) and Paul Hollick (ICFM), as well as Stewart Lightbody, current ACFO deputy chairman, and Peter Eldridge, current sales and marketing director of ICFM. The expectation is that both Sandall and Hollick will remain as co-chairmen going forwards.

The Board will oversee the continuation of the work of both ACFO and ICFM, whose respective Boards and work on industry campaigning and education will continue in the short term ahead of a full merger in around 9-12 months.

The organisation will also oversee fleet training through a newly established Fleet Academy with a number of committees launched to take responsibility for organising more webinars and seminars and an annual conference and other events as well as campaigning/lobbying. The organisation will also exhibit at other events organised across the fleet industry.

The new association will also have its own website – www.theafp.co.uk – featuring white papers on key issues and informative blogs; an online members’ forum; and thought leadership and guidance on major taxation and legislative changes. It will also build on ACFO’s work on providing support to the Fleet and Mobility Management Federation Europe and the Global Fleet Consortium Network.

There will also be additional online training and educational ‘masterclass’ content on a wide range of business-critical issues.

ACFO chairman Caroline Sandall said: “We believe that both organisations are two-sides to the same coin and will deliver an increased fleet industry voice through their combined strength. Bringing both together creates a true fleet body for the industry – giving fleet operators a true voice via the lobbying of ACFO with the training and education of the ICFM. The combined Association of Fleet Professionals unites the two organisations in both structure and leadership teams.”

In the short term, AFP membership will take over for ACFO members while in the medium term, ICFM members will become member of the ‘AFP Fleet Academy’ to ensure correct accreditation of their training. It’s expected that AFP will have more than a thousand members, as there is currently little crossover in terms of joint membership of both associations.

ICFM chairman Paul Hollick said: “Both organisations have been in active dialogue for a few years on this topic and now is definitely the best time to join forces.

“As the fleet industry is going through significant challenges with changing legislation, tax regulations, new technologies and Clean Air Zones the merger seems to be a great time for the ACFO team to focus on the fleet manager’s voice within Westminster, Whitehall and UK cities while the ICFM team can then devote its time of being a true Fleet Academy to educate and develop the current and future leaders within fleet and those coming into fleet from other areas of business.

“Both organisations are well run and organised for a sustainable future. That said, a united association brings more resilience and scale that can improve the lobbying and training needs of members of both organisations, now and in the future.”