Volkswagen is stepping up its plans for EVs under a new strategy that will see Volkswagen change “as never before”. 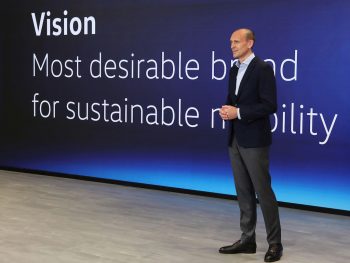 By 2030, Volkswagen says electric cars will account for 70% of its sales in Europe instead of the previously planned 35%

Speaking during a corporate strategy update streamed online, CEO Ralf Brandstätter set out that the new target is for electric cars to account for 70% of the brand’s sales in Europe by 2030; double the previous target.

In the US and China, the share of electrically powered vehicles is to rise to 50% by 2030.

But the combustion engine will remain a part of its strategy for now, including for next-generation models such as the Golf and Tiguan.

And the shift to electromobility is just part of the strategy; the brand says its work on the digitisation of products and business models will also put it in pole position.

“Of all the major manufacturers, Volkswagen has the best chance of winning the race. While competitors are still in the middle of the electric transformation, we are taking big steps toward digital transformation,” added Ralf Brandstätter.

Volkswagen added that alongside electrification and software, it will also explore new data-based business models, tapping into the expanding ‘usage’ market for cars, and taking autonomous driving mainstream by 2030.

Brandstätter stressed: “Just as we have boldly moved forward on the topic of e-mobility, we are also tackling the other issues of the future.”