Volvo Cars has unveiled the new V60 estate, which will renew its presence in the compact executive sector when it goes on sale later this year. 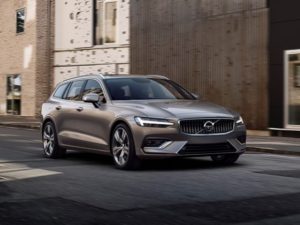 Derived from the same scaleable platform as the XC60 SUV, as well as the new 90 Series cars, the newcomer will rival big-selling compact estates including the Audi A4 Avant, BMW 3 Series and Mercedes-Benz Class.

It launches with a choice of two petrol engines – the T5 and T6 at 251bhp and 316bhp respectively (based on other models), plus the 148bhp three-cylinder D3 and 188bhp four-cylinder D4 diesels.

As in the outgoing car, there will also be two plug-in hybrid versions; the 340hp T6 Twin Engine and 390hp T8 Twin engine.

Expect the range to comprise the same Momentum, Inscription and R-Design versions offered in other models, as well as a raised-height Cross Country estate-SUV crossover. The V60 will also be joined by the S60 saloon, which should appear at a future motor show in regions such as Asia or North America, where four-door bodystyles are more popular than in Europe.