Volvo XC40 gets revised engines with PHEV to follow

Volvo has updated its XC40 compact SUV with upgraded engines ahead of the 2020 arrival of a plug-in hybrid and a pure EV in the future. 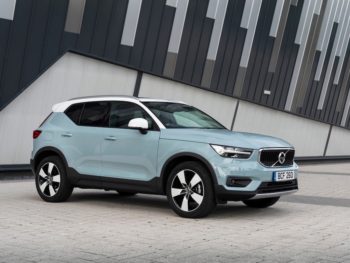 On sale now, the revised range brings a power increase and new automatic transmission option for the 1.5-litre T3 three-cylinder petrol engine that was introduced to the range last summer. Output rises from 156 to 163hp, reducing the 0-100km/h time from 9.4 to 9.3 seconds for the existing six-speed manual. The engine is also now available for the first time with the option of an eight-speed automatic transmission, which brings a 0-100km/h time of 9.6 seconds.

T3 efficiency has also improved, with WLTP combined fuel economy of between 37.2 and 41.5mpg for the T3 manual, against figures of 36.7 and 39.8mpg for the previous version. The manual car’s NEDC Correlated CO2 emissions are also lower, ranging from 142 to 146g/km, compared with 144 and 148g/km previously.

Meanwhile, the 2.0-litre four-cylinder T4 petrol engine is now available with two-wheel drive, to complement the existing all-wheel drive version. The front-wheel drive T4 offers a 0-100km/h time of 8.4 seconds – 0.1 seconds faster than the AWD version – while its WLTP combined fuel economy ranges from 33.6 to 36.7mpg. The T4 FWD is priced £1,400 below the equivalent AWD version.

The XC40 range will soon expand further with the introduction of a T5 Twin Engine petrol-electric plug-in hybrid variant. Full details of the T5 Twin Engine will be announced shortly but Volvo says it will start UK deliveries in early 2020. A fully electric version is also expected – part of Volvo’s plans for half its sales to be EVs by 2025.

Spec changes for the R-Design grade see all versions with an automatic transmission now come as standard with paddle shifts mounted on the steering wheel.

Standard equipment across the range also sees the addition of auto-folding door mirrors, a 12-volt power outlet in the luggage compartment, a locking glovebox and a load protection net. New colour choices have also been introduced along with a new Winter Plus pack option and an upgraded Blind Spot Information System option with a new Steer Assist function.