Volvo has revealed its first-ever fully electric car, the XC40 Recharge, which sits under its new Recharge brand. 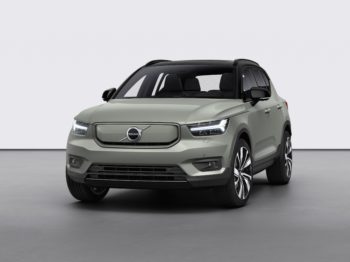 Part of the carmaker’s overarching new plans to become climate-neutral by 2040, the XC40 Recharge joins the existing XC40 line-up, including the new plug-in hybrid and petrol-engined models, in line with Volvo’s plans to generate 50% of global sales from fully electric cars by 2025.

The first of five fully electric cars due by 2025, the XC40 Recharge is expected to cost around €43k when it arrives next year, and features an all-wheel drive powertrain with an electric motor on each axle and offering an output of 408hp and a 0-100kph time of 4.9 seconds. A 78kWh lithium-ion battery pack charges to 80% of its capacity in 40 minutes on a fast-charger system and overall range will be more than 400km.

As well as marking the inaugural Volvo to use the carmaker’s new Recharge branding – also being applied to plug-in hybrids as well as EVs and with a Recharge option within all Volvo model ranges – the XC40 Recharge is the first Volvo with a brand-new infotainment system powered by Google’s Android operating system. The system is fully integrated with Volvo On Call, the company’s digital connected services platform, which provides data including the ability for plug-in hybrid drivers to track how much time they spend driving on electric power.

The Recharge range will also encourage plug-in hybrid drivers, via incentives, to use ‘Pure’ mode as much as possible, as controversy continues over drivers’ misuse of PHEVs. This includes free electricity for a year for all Volvo Recharge plug-in hybrid models, provided through a refund for the average electricity cost during that period.

Styling will mirror the rest of the XC40, with just a blanked-off radiator grille, Recharge branding and other minor design tweaks to mark the XC40 Recharge out.

“We have said this several times before: for Volvo Cars, the future is electric,” said Håkan Samuelsson, president and chief executive officer of Volvo Cars. “Today we take a major new step in that direction with the launch of our fully electric XC40 and the Recharge car line.”