Jaguar has updated its XE and XF ranges with a new mild hybrid diesel and technology including its latest Pivi Pro dual-sim infotainment system. 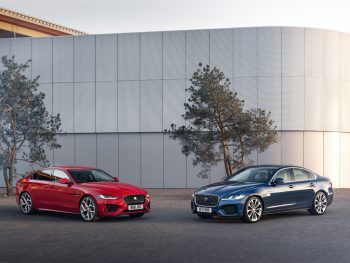 On sale now, the new models are priced from £29,635 for the XE and £32,585/£35,990 for the XF saloon/Sportbrake and also deliver streamlined ranges, with the number of derivatives more than halved in both cases.

The new 204hp mild hybrid diesel featured across both models uses a 48V set-up and replaces the previous 180hp unit in the range, bringing reduced emissions and improved fuel economy as well as increased performance. CO2 starts from 127g/km for the XE with 4.8l/100km on the combined WLTP cycle, while the XF saloon stands at 130g/km and 4.9l/100km.

For petrol drivers, the range includes a choice of 250hp or a 300hp versions of the 2.0-litre four-cylinder producing 365Nm and 400Nm respectively. Both feature latest engine technologies including a twin scroll turbocharger and Continuous Variable Valve Lift (CVVL) to support performance and efficiency.

All models come with eight-speed automatic transmission and are available with all-wheel drive instead of the standard rear-wheel drive.

It’s backed up by over-the-air updates, powered by its own separate battery, and comes complete with 10-inch central touchscreen for the XE and 11.4-inch curved glass HD touchscreen for the XF and with Apple CarPlay and Android Auto as standard. Both models also feature a 12.3-inch HD Interactive Driver Display with enhanced graphics and a configurable layout.

The XE and XF are also available with Jaguar’s second-generation wearable Activity Key that enable drivers to lock, unlock and start the vehicle without the need for the conventional key fob. The XF also gets Jaguar’s latest 3D Surround Camera technology as standard on all derivatives.

Latest updates also bring new exterior detailing for the XF including new front bumper and grille, while both models get a more luxury focus for the interior.

Updates also see both models streamlined to simplify both the manufacturing process and the buying process. The XE goes from 24 to 13 derivatives while the XF range drops from 64 to 28. They also trial a new ‘browse, buy, drive away’ approach that gives the same online and offline pricing “so that customers know they’ll get the equivalent price, however they choose to purchase”, according to the brand.