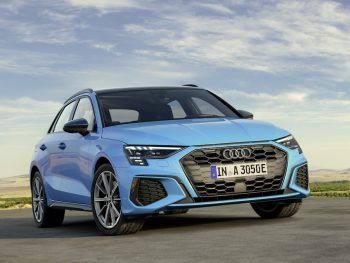 The new A3 Sportback 40 TFSI e joins Audi’s existing plug-in hybrid versions of the A6, A7, A8, Q5 and Q7 models, and comes as the brand turns its attention to its compact models.

Offering CO2 of 30-34g/km, the initial version of the A3 Sportback plug-in hybrid compact hatchback uses a 150hp 1.4-litre petrol with a 109hp electric motor and a six-speed S tronic transmission. Offered in Sport and S line trims, the powertrain delivers a total 204hp and 350Nm, giving a 0-100km/h time of 7.6 seconds and a top speed of 227km/h. It also provides official WLTP fuel economy of 1.5–1.4l/100km. A higher-performance version will launch later this year.

The 13.0kWh battery also enables fully electric travel at speeds of up to 140km/h while the car features an Acoustic Vehicle Alert System that activates at low speeds to warn surrounding pedestrians and other road users that the vehicle is approaching.

The battery sits under the rear seats, reducing boot space to 280 litres of capacity, rising to 1,100 litres by folding the seat backs.

As well as offering a hybrid mode, the A3 Sportback 40 TFSi e can be switched to ‘Battery Hold’ and ‘Battery Charge’ modes to either keep battery charge at the current level or supplied with as much recaptured energy as possible.

Drivers can also use the standard Audi drive select programme to switch between Comfort, Auto, Dynamic and Individual profiles for driving.

Charging can be carried out using a domestic AC wallbox with the Type 2 cable supplied – a full recharge in this way takes a little more than four hours and charging activation and deactivation times can be designated by the driver using the myAudi app. Charging can also be carried out at public charging points using a type 3 cable.

Deliveries of the new A3 Sportback 40 TFSI e start in most European markets this autumn. Prices start from €37,470.92 in Germany.