BMW outlines early technical details for i Hydrogen Next

BMW has given the first insights into the powertrain system for its i Hydrogen Next concept as it outlines its commitment to hydrogen fuel cell technology, in particular for its SUV range. 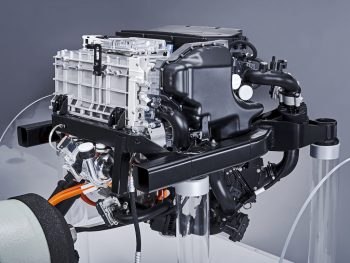 Unveiled at the Frankfurt Motor Show, the i Hydrogen Next concept provides a toe in the water for the carmaker ahead of plans to introduce a production car powered by hydrogen fuel cell technology in the second half of the decade.

While BMW has said it has no doubt as to the long-term potential of fuel cell powertrain systems, it will be some time before it offers such a production car due to the current lack of infrastructure.

But BMW R&D chief Klaus Fröhlich added: “We are convinced that various alternative powertrain systems will exist alongside one another in future, as there is no single solution that addresses the full spectrum of customers’ mobility requirements worldwide.

“The hydrogen fuel cell technology could quite feasibly become the fourth pillar of our powertrain portfolio in the long term. The upper-end models in our extremely popular X family would make particularly suitable candidates here.”

The BMW Group has been working with the Toyota Motor Corporation on fuel cell technology since 2013 and the collaboration will help the carmaker to pilot a hydrogen fuel cell electric powertrain in the i Hydrogen Next concept on a small-scale production in 2022.

The concept, which is based on the X5, uses a fuel cell system that generates up to 170hp, with just water vapour emitted by the vehicle.

The electric converter located underneath the fuel cell adapts the voltage level to that of both the electric powertrain and the peak power battery, which is fed by brake energy as well as the energy from the fuel cell. The vehicle also accommodates a pair of 700 bar tanks that can together hold 6kg of hydrogen, giving a long range, while refuelling only takes three to four minutes, according to BMW.

In line with its multi-solution approach to future powertrains, BMW is also continuing its work on bringing battery electric vehicles to market. Its electrified vehicle plans are scheduled to see a total of 25 models launch by 2023, including at least 12 with an all-electric powertrain.