Škoda has published a new teaser image of its forthcoming Fabia, showing that the fourth generation will up the ante on size and space as well as safety. 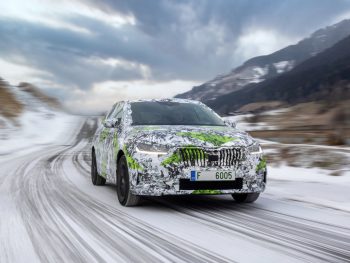 The fourth-gen Fabia is the first to be based on the MQB-A0 platform, bringing increased space and enabling the use of the latest passive and active assistance systems

The images of the Fabia in prototype form follow the teaser earlier this month and show how the shift to the new MQB-A0 platform, already used for the Volkswagen Polo, will enable significant increases in space. The new Fabia stands at 4,107mm long, 1,780mm wide and 1,460mm tall – longer by 110mm and wider by 42mm but slightly shorter. Boot capacity is up to 380 litres minimum and 1,190 litres maximum; both increased by 50 litres.

Engine line-up, depending on market, will feature five petrol engines; all from the Evo family and including two MPU three-cylinders and three TSI direct-injection units. The range-topper will be the 150hp 1.5 TSI with a seven-speed DSG as standard and featuring active cylinder technology (ACT). Official fuel and CO2 figures are yet to be announced.

Being a Škoda, it will debut new Simply Clever innovations; 13 new in total and with an overall array of 43 features.

New safety tech will also debut and includes Travel Assist, Park Assist and Manoeuvre Assist available for the first time, while the vehicle can be equipped with up to nine airbags to protect the occupants in the event of an accident. It’s also the first Fabia to offer additional ISOFIX anchors and top tether anchor points even for the front passenger seat.