Suzuki is one of the largest car companies in the world, despite producing some of the smallest vehicles, and it’s global expansion is about to grow…

Joint development
Known for its broad range of vehicles ranging from utility ATVs, outboard motors, cars and motorbikes, Suzuki is often seen as a small Japanese industrial with grand ambitions. Even the 89-year old Osamu Suzuki who still serves as the company’s representative director and chairman refers to the company as a startup.

Yet, despite its apparent small size and the diminutive nature of its products, Suzuki is a traditional brand that can trace its heritage all the way back to 1909 when Michio Suzuki founded the Suzuki Loom Works in Hamamatsu, Shizuoka Prefecture in Japan.

In 2018, Suzuki was the eighth largest automaker by production worldwide. The company employs 45,000 people globally through its various offices and automobile manufacturing facilities that can be found across 21 countries, in 34 factories. In total, its products are distributed in 147 countries by 261 automotive (automobile and motorbike) distributors.

Core global models range from the five-door hatchback Suzuki Swift (including Sport model) and the all-wheel drive Jimny, to the SUV Vitara and practical Carry pickup. In addition, in its home market Suzuki enjoys sales of its comprehensive Kei car range that have helped make it the second largest in terms of domestic sales volume.

History has transformed the company into what it is today from its motoring origins, which began in June 1952 when Suzuki launched the Power Free 36cc, 2-cycle motorised bicycle followed three years later by its first mini vehicle, which arguably helped spawn the Kei car class in Japan.

Reaching 1 million global automotive sales in 1987, Suzuki’s dominance in the minicar sector was all but assured for the foreseeable future, especially considering an increase in climate awareness and depleting oil reserves. That story has only grown in the years to date, including in its motorbike sales, reaching a heady 40 million motorcycle units produced globally, twenty years ago in 1999, and in 2013 its global automobile sales soared to 50 million for the first time.

Today, Suzuki enjoys continued success that hasn’t gone unnoticed by others, with Suzuki having formed partnerships over the years with the likes of GM, Proton, and Volkswagen. However, the latter hasn’t always had a rosy relationship, with Suzuki buying back all of its Volkswagen-owned shares in 2015.

Similarly, the company was investigated for its part in the globally-affecting emissions scandal, with the Japanese Ministry of Land, Infrastructure, Transport and Tourism (MLIT) looking into discrepancies regarding the emission and fuel efficiency testing process. The result concluded that the company had misled customers. However, immediately after the investigation and ensuing apology from Suzuki, the company announced the start of a business partnership with Toyota.

This critical point in the company’s past led to the first hybrid Solio and Solio Bandit, while separately but simultaneously expanding company operations into India where the car market was blossoming. Ultimately, in March 2018, this led to the formal agreement between Suzuki and Toyota to supply hybrid and other vehicles to the Indian market, while later that year automobile production figures for Suzuki in India reached 20 million units.

The Toyota agreement has recently developed further, to include a long-term partnership on collaboration in “new fields” including autonomous driving. Furthermore, Toyota is to supply Suzuki with its hybrid system, as well as provide the RAV4 and Corolla Wagon to Suzuki for sale in Europe. Similarly, Suzuki is to supply Toyota with newly developed engines for compact vehicles in Europe, although these will be built by Toyota in Poland.

In addition, Suzuki will supply Toyota with various models for sale in Indian and African markets, as well as the joint development between the two firms of an all new MPV for the Indian market specifically, where Maruti Suzuki has a current domestic share of around 50%.

Toyota President Akio Toyoda said: “When it comes to vehicle electrification, which is expected to make further inroads, hybrid technologies are seen as playing a huge role in many markets, as from before. Widespread acceptance is necessary for electrified vehicles to be able to contribute to Earth’s environment. Through our new agreement, we look forward to the wider use of hybrid technologies, not only in India and Europe, but around the world.”

Although the company’s roots started with two wheels, cars have cemented Suzuki’s achievements. However, despite the company’s obvious global success story, the first quarter of the 2019 financial year saw a reduction in the company’s profits, which Suzuki attributes partly to a decrease in Indian automobile sales due to a slowdown in the overall market.

Conversely, and with global market trends falling into the lap of Suzuki, the company’s motorbike and marine businesses improved, resulting in fiscal forecasts of minor sales increases accompanied by an expected 11.9% net income increase to €1.68bn (¥200bn) for the end of the 2019-2020 financial year.

It seems that the tiny giant from Japan isn’t about to stop its insatiable growth. 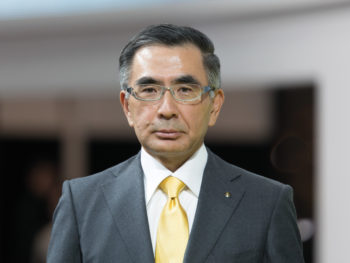 Suzuki’s first paragraph of its mission statement is, “develop products of superior value by focussing on the customer”. We will constantly make the best effort to create truly valuable products that satisfy our customers.

Under the slogan “small cars for a big future”, we will work toward manufacture of “small cars” and “environmentally-friendly products”. We will also work on lean, efficient and sound management by emphasising the “smaller, fewer, lighter, shorter, and neater” concept in all areas.

The automobile industry is undergoing a period of great transformation.

For climate change, we clearly recognise it as a risk and an opportunity related to the business. For example, while various regulations including those for exhaust gas and CO2/fuel consumption levels are becoming stricter, increase in the burden of research expenses to comply with these regulations is a risk that may affect the performance of the company. On the other hand, small cars require fewer materials and energy in production, and emit less CO2 while in use. We have the strength in developing and popularising these technologies, and by continuing to enhance them we are able to make climate change into a big opportunity.

Along with making small cars and developing high-efficiency powertrains, we will proactively make efforts in expansion and strengthening of hybrids and the new development of EVs. The Group is applying the Suzuki Environmental Plan 2020 and working for the development and adoption of environmental technologies and reduction of CO2 emissions.

Customer safety and security is the top priority for the Group, and we are working to develop and produce high-quality products which customers can use safely and securely and to provide after-sales services.

We aim to become a Group loved and trusted throughout the world and will continue working on contributions to the environment and the society. We ask for your continued support.