By Jonathan Musk / 1 year ago / News / No Comments
Honda has confirmed its Swindon manufacturing facility – where 3,500 employees build the Civic and certain engine lines – will close, following plans made in February. 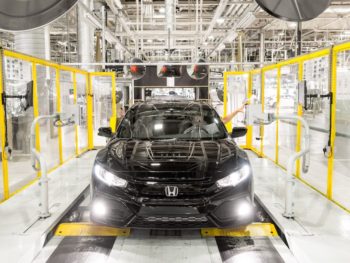 Swindon currently produces 150,000 cars per year, and has around 3,500 employees

The closure will take place at the end of the current model’s production lifecycle in 2021.

Honda said in a statement that the decision had been made following a “meaningful and robust consultation process” that included the UK Government and the UNITE union, but that ultimately no viable alternatives had been identified.

In its statement, Honda reaffirmed that the decision was part of its broader global strategy and due to the acceleration of its electrification plans, a result of resources, capabilities and production systems for electrified vehicles will be focused in regions with a high volume of customer demand.

The Japanese company added that following the decision, the second phase will begin immediately, whereby redundancy packages and the impact on individual roles will be identified up until production ceases in 2021.

Honda will also intensify its engagement with the Swindon Task Force set up by Secretary of State Greg Clark, in order to work with government and a broad range of stakeholders to mitigate the impact of this decision on the wider community.

Honda of the UK Manufacturing director, Jason Smith, said; “It is with a heavy heart that today we confirm the closure of Honda’s factory in Swindon. We understand the impact this decision has on our associates, suppliers and the wider community. We are committed to continuing to support them throughout the next phases of the consultation process.”

Previous: Citroën 19_19 Concept places focus on ‘ultra-comfort and extended mobility’
Next: Sofico ties up with Jato to offer WLTP data through Miles