By Natalie Middleton / 7 months ago / News / No Comments

Hyundai has revealed a new 180mph ‘air taxi’ concept that could be used to power Uber’s forthcoming aerial ridesharing service. 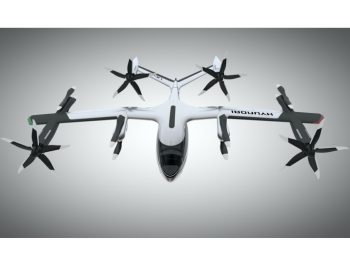 As announced at this year’s Consumer Electronics Show (CES) at Las Vegas, Hyundai has become the first automotive company to join the Uber Elevate project, which was first announced in a white paper in 2016 and planned for launch in 2023, regulations permitting.

Revealed at CES, Hyundai’s S-A1 all-electric concept air taxi can carry four passengers while travelling up to 290kph at a cruising altitude of around 1,000-2,000 feet, covering trips up to 100km, and able to take off and land vertically (eVTOL).

The Hyundai S-A1 air taxi will be 100% electric and will require about five to seven minutes for recharging. It will initially be piloted, with plans to switch to autonomous operation in coming years.

“Our vision of Urban Air Mobility will transform the concept of urban transportation,” said Jaiwon Shin, executive vice president and head of Hyundai’s Urban Air Mobility (UAM) Division. “We expect UAM to vitalise urban communities and provide more quality time to people. We are confident that Uber Elevate is the right partner to make this innovative product readily available to as many customers as possible.”

Hyundai’s work on aerial ridesharing also includes a new ground transportation idea, the Purpose Built Vehicle (PBV) concept, which could be teamed up with passenger air vehicles and a ‘Hub’ mobility space.