Infiniti is to withdraw from Western Europe as part of a restructuring plan that will also see UK production of Infiniti models cease by the middle of this year. 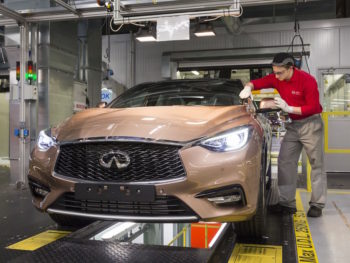 Production of the Q30 started at Sunderland in December 2015

Founded by Nissan in 1985 as its premium brand, Infiniti launched in Europe in 2008 and started production at Nissan’s Sunderland, UK, plant in December 2015.

The company restructure will see it pull out of Western Europe altogether due to poor sales, and instead concentrate on its largest growth markets, specifically North America and China. Infiniti added that the move would have no impact on Infiniti’s ongoing operations in Eastern Europe, Middle East and, Asia, which continue to grow.

Infiniti will also discontinue diesels and “electrify” its portfolio from 2021 onward while also placing more focus on its SUV lineup in North America, bringing five new vehicles to China over the next five years, working to improve quality of sales and residual value, and realising more synergies with Nissan.

Dealers in Western Europe will remain operational until until a tailored transition plan is put in place for continued aftersales services, including vehicle servicing, maintenance and warranty repairs.

Production of the Q30 and QX30 will stop at Sunderland by mid-2019, with the hope that workers can be redeployed within the plant.  The move comes just a month after Nissan confirmed that it was axeing plans to move production of the next-gen X-Trail for the European market to Sunderland – the decision was said to be due in part to declining diesel sales as well as global downturns in car sales, including in China, but the carmaker said at the time that Brexit uncertainty had had a hand in the decision.