Kia has launched its ‘one-stop shop’ EV charging service in the UK, expanding on its European coverage. 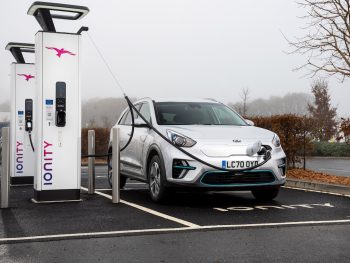 Negating the need for drivers to sign up for multiple accounts, the service provides more comprehensive access to the UK public charging network than any equivalent service – it covers over 13,900 UK charging points, equating to 68% of the network.

The UK coverage expands the existing pan-European proposition – drivers can access more than 178,000 additional charging points across 28 other European countries without the need for additional contracts.

Aimed at drivers of the brand’s fully electric and plug-in hybrid vehicles, KiaCharge is accessed via an app or RFID card, while payments are made via a single itemised monthly invoice.

It initially launches with access to several major charging networks, including BP pulse, Pod Point, Ionity, Source London, Chargepoint, NewMotion, Char-gy, and ESB, as well as a number of regional services. And there are plans to further expand KiaCharge coverage throughout 2021.

Created in partnership with Digital Charging Solutions (DCS), the service offers a choice of two tariffs: ‘Easy’ and ‘Plus’. Easy is aimed at less frequent users while the Plus tariff is targeted at those who rely more heavily on public charging. Users of both tariffs pay per kWh, but Plus customers earn an additional 15% discount per kWh from most networks (except BP Pulse, Pod Point and Ionity).

Customers can also add a new or existing BP Pulse bolt-on subscription, giving a discount of up to 40% while an Ionity bolt-on tariff will also be launched later in 2021 to coincide with the launch of Kia’s forthcoming fully electric battery EV, which will be able to make use of the high-speed charging capabilities of the Ionity network thanks to its 800V maximum charging capacity.

Paul Philpott, president & CEO of Kia Motors UK, said: “The availability and suitability of public charge points remains a perceived hurdle for many would-be electric car buyers. KiaCharge seeks to remedy this by providing a comprehensive, easy-to-use public charging service for our customers, accessible from a single account. This is a major step for Kia as we look for new ways to make EV ownership a more viable and stress-free option for many more drivers.”