DriveNow UK’s operations in London will shut down by 29 February 2020, the company has announced. 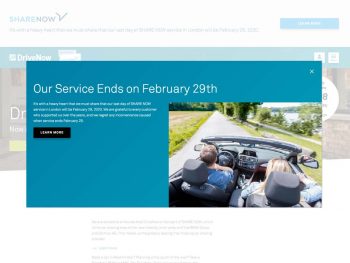 DriveNow UK will close its London operations on 29 February 2020

In a statement, the company said that the decision was “not made lightly” and that depite five years of investment the company was unable to grow sufficiently in London.

The service began operating in London in December 2014, with the aim to offer a flexible car sharing mobility solution in combination with public transport as an alternative to private cars.

“The number of customers in London and their demand for our car sharing service was below our expectations and lower than in other Share Now cities. Furthermore we had to face local factors, like high costs of operation and the different circumstances in the single boroughs,” the company stated on its website.

The London service is not the only DriveNow service facing closure, with operations in Florence and Brussels suffering a similar fate. Share Now (the parent company of DriveNow) will remain operating in 18 other European cities which show a higher potential for profitable growth, the company said.

For any questions or concerns, please contact [email protected]

DriveNow was wholly owned by BMW (since March 2018) before the ‘Your Now’ joint venture was formed with Daimler AG, to bring synergy to car sharing for the brands.

BMW’s Alphabet and business-orientated AlphaCity car sharing is not affected by the announcement. Alphabet (GB) Limited’s Uwe Hildinger, chief operating officer said: “Share Now/DriveNow is a joint venture with Daimler which operates independently to BMW Group and Alphabet. Alphabet is wholly owned by the BMW Group.

“AlphaCity is a car sharing platform from Alphabet which is dedicated to solving the on-demand mobility requirements of businesses and their employees, not private individuals.

“AlphaCity is unaffected by this announcement from Share Now and continues as usual in the UK, keeping Corporates, SMEs and Public Sector organisations and their employees moving.”

DriveNow began operating in 2011 in Germany, before expanding throughout Europe’s major cities. The London operation included around a 720-strong fleet of BMW and Mini cars, including electric BMW i3.

The closure of the service comes at a time when London is making moves to drastically reduce emissions in the city, with drivers urged to switch off engines when stationary, as well as this year’s introduction and implementation of the Ultra Low Emission Zone. Car sharing was seen as a key mobility service to enable people living in the city to remain mobile without the cost or ownership burden of a private car.