From electric cars to popular crossovers, Nissan has observed a miraculous recovery from its near-bankruptcy in 1999. Today, it is part of the world’s largest automotive alliance, selling the lion’s share of 10.6 million units. 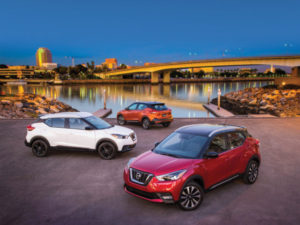 Nissan has an estimated global market share of 5.5% and 4% in Europe

How things have changed

“In 1999, when I arrived to Japan, Nissan was on the brink of bankruptcy, selling 2.3 million cars, and owing €16bn ($20bn) in debt. Today, we sell 5.6 million cars, with over €12bn ($15bn) in cash. Nissan is also a core member of the largest automotive alliance in the world. We now have every advantage, and no handicap. There is no limit to what we can achieve,” Carlos Ghosn, chairman of the board, Nissan Motor, said in March 2017.

Today, Nissan’s global headquarters in Yokohama, Japan, manages operations in six regions: Asia & Oceania; Africa, the Middle East & India; China; Europe; Latin America; and North America. Nissan has a global workforce of 247,500 people and has been partnered with French manufacturer Renault since 1999, the same year as Carlos Ghosn took the helm. In 2016, Nissan acquired a 34% stake in Mitsubishi Motors and today Renault-Nissan-Mitsubishi is the world’s largest automotive partnership, with combined annual sales totalling more than 10 million vehicles a year.

Nissan now enjoys a healthy European market share of 4.0% where the top four models are the Qashqai, Juke, X-Trail and Micra; indicating the market acceptance and popularity of SUV and crossover vehicles – an area that Nissan helped pioneer and was earlier than most in recognising its importance. “The improvement in our global crossover and SUV sales made a significant contribution to Nissan’s growth in 2017,” said Daniele Schillaci, executive vice president for Nissan.

Nissan’s global crossover and SUV sales increased more than 12% in 2017 to more than 2 million vehicles, driven by the all-new Nissan Kicks small crossover, the Rogue, X-Trail and Qashqai compact models and a refreshed Armada full-size SUV. Over the past five years, the premium midsize crossover segment has quadrupled in China and more than doubled in the US. Overall, Nissan’s record crossover and SUV sales in 2017 were led by a 94% improvement in Latin America and 16% improvements in both North America and China. The Nissan Rogue, X-Trail and Qashqai platform mates generated more than 1.38 million sales worldwide in 2017, an increase of 10%, and ranked as Nissan’s No. 1 platform by volume. In total, Nissan increased global crossover and SUV volume by nearly 230,000 vehicles last year. The Kicks benefited from its first full year of sales in Mexico, Latin America and China, reaching nearly 109,000 sales worldwide. The small crossover will launch this year in the US and Canada and is expected to further accelerate Nissan’s crossover momentum.

As part of Nissan M.OV.E. to 2022, the company plans to extend its leadership in electric vehicles, symbolised by the world’s best-selling all-electric vehicle in history, the Nissan Leaf. Following its successful launch in Europe, Japan and North America, Nissan has since confirmed the Leaf will be introduced into eight Latin American markets during the next fiscal year.

Under the title, “Nissan Intelligent Mobility” the company aims to offer autonomy, electrification and connectivity and contribute to “improving the future of mobility”. To achieve this, Nissan is exploring technology at the fringe of science fiction, with development in autonomous driving, vehicle-to-grid (V2G) and even brain-to-vehicle (B2V). B2V interprets signals from the driver’s brain to assist with driving and to help the vehicle’s autonomous and manual systems learnt from the driver. The technology promises shorter reaction times and systems that adapt to maximize driving pleasure.

For technology that can be taken home today, Nissan introduced ProPilot with the new generation Leaf in late 2017 and has since introduced it to other vehicles including Qashqai. ProPilot is a set of technologies offering low-level autonomy, such as lane keep assist and fully autonomous parking. Nissan has already sold more than 80,000 ProPilot equipped vehicles, indicating its popularity.

The Nissan Leaf is, of course, not the only electrified vehicle in Nissan’s line-up. The e-NV200 – a battery powered electric version of the popular NV200 panel van – is proving a popular choice for fleets and last-mile delivery companies. More recently, Nissan introduced ePower in the Note, initially for the Japanese market only. Following its popularity, Nissan has introduced the Serena ePower, also for the Japanese market, at the end of February this year. EPower offers 100% electric drive, supported by a small petrol generator that supplies electricity to via a small battery. The result is a relatively light electric vehicle that can be driven with petrol car convenience.

Furthermore, Nissan recently took Alliance partner Renault’s place in Formula E, which the company says will be used to directly influence its future electric vehicles, as hinted by the IMx Kuro concept shown at the Geneva Motor Show.

As for the future of fleet at Nissan, the company unveiled a new structure in the UK at the beginning of 2018, to make itself simpler for businesses of all sizes to engage with its range of cars and vans under its new “We Mean Business” strategy. 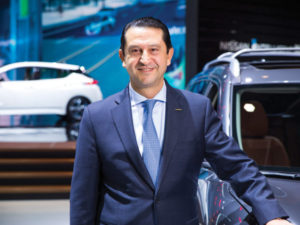 View from the top

Performance: Last year Nissan set new records for global sales and production selling more than 5.8 million vehicles worldwide. We also set a new sales record in Europe with more than 762,000 vehicles sold. We also surpassed another great milestone with production of the three millionth Qashqai at Nissan’s Sunderland plant in the UK.

Electrifying: Today, the Nissan Leaf is the world’s best-selling EV with more than 300,000 sold. Customer satisfaction rates for the Leaf are also among the highest in the industry, with a 94% overall approval rating. Last September, we held the world premiere of the latest-generation Nissan Leaf. The early customer reaction has been very strong. Before the car even appeared in showrooms we received 13,000 customer orders and we should surpass 20,000 orders in just five months. Right now, we are selling a Leaf approximately every 12 minutes here in Europe.

Growth: Last year, Nissan also launched Nissan M.O.V.E. to 2022. With it, we will achieve sustainable growth and lead the technology and business evolution of the automotive industry. 2017 was also another record-breaking year for our global alliance with Renault and Mitsubishi. Together, the member companies of the Alliance sold more than 10.6 million units, making it the number one automotive group worldwide.