BMW has revealed the second-generation X4 coupe-SUV, replacing a model which has sold 200,000 units since it launched in 2014. 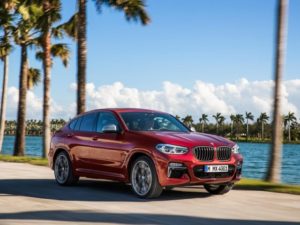 The X4 launches with three diesel engines; the 190hp 20d, which is the likely big-seller in Europe, offering CO2 emissions of 142g/km and consuming 5.4l/100km, alongside the 25d and high-performance M40d, which produces 326hp and reaches 100kph in 4.9 seconds.

Like its sibling, the new X3, the X4 is longer and wider than the car it replaces. It now features three full-size seats across the rear bench – instead of the narrow centre seat in the outgoing model – and the rear bench angle is adjustable, and folds in three sections. BMW is offering the same driver assistance and connectivity functions available in the X3.

The announcement comes as the 200,000th first-generation car leaves the production line in Spartanburg, in the United States; a white xDrive20d built for a customer in Asia, the manufacturer said.