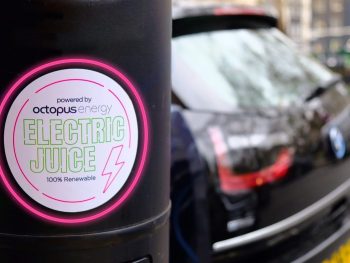 The network launches with Char.gy, which offers lamp post charging – particularly ideal for those without a driveway at home – and with more partners to follow

The Electric Juice Network scheme can be used by any electric car driver – including non-Octopus Energy’ customers – and initially provides access to urban charging points through the Char.gy network, but with other partners to follow. This includes expansion into Europe.

Charging costs for all users are invoiced through a single bill – providing a solution to the long-standing issue of a lack of standardised payment measures.

The launch of the new roaming service follows Octopus Energy’s work last year to deliver time-of-use tariffs and smart analytics to charging companies across the UK and will soon be supported by the Electric Juice app, which will also enable drivers across Europe to take advantage of the same service.

Greg Jackson, CEO and founder of Octopus Energy, said: “Electric vehicle drivers have rightly long-complained that public charge points can be a real hassle, and it’s hard to keep track of costs, as every network runs on a unique app or card basis.

“Octopus’s Electric Juice Network doesn’t just consolidate charging costs, it adds them to your Octopus Energy bill if you’re an existing customer. For non-Octopus customers, you can still use the service to ensure you’re able to track (and pay) in one simple way.

“We’re delighted to launch the Electric Juice Network with Char.gy, as part of our combined mission to make EV charging as simple as possible.”