Renault is adding its E-Tech plug-in hybrid technology to the Mégane as part of a mid-cycle update, providing differentiation in what it says is an increasingly crowded segment. 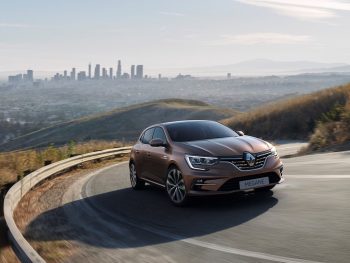 The facelifted Mégane arrives this summer

Developed in-house, the E-Tech hybrid system has already debuted with the fifth-generation Clio (see road test here) as part of plans to bolster sales, and appeared as a plug-in hybrid, complete with a mains charger and larger-capacity battery, in the Captur crossover; both models made their world debut at the Brussels Motor Show at the start of the year.

As planned, the plug-in hybrid E-Tech powertrain is now being extended to the facelifted Mégane, which goes on sale this summer. It’ll initially be offered with the Mégane Sport Tourer estate, before arriving on the hatchback version, and teams up a four-cylinder 1.6-litre petrol engine with two electric motors and a multi-mode clutch-less gearbox which optimises shifts. The 9.8kWh battery enables it to run on full-electric mode for 50km in mixed cycle (WLTP), emitting less than 40g/km of CO2 (WLTP figure pending final approval).

Drivers can choose from three settings: Pure, which switches to full-electric mode provided there is enough power; MySense, which optimises the hybrid mode for lower running costs; and Sport.

The E-Tech is being offered alongside a 1.3 TCe FAP petrol engine and a 1.5 Blue dCi diesel engine, both with a choice of a six-speed manual transmission or a dual-clutch seven-speed automatic transmission. Economy figures are still be announced for all powertrains.

The updated Mégane goes on sale from summer 2020, with prices to be confirmed closer to the launch.

Previous: UK petrol and diesel ban to take effect in 2035 and include hybrids
Next: Volkswagen teams up with Hermes for UK trials of in-car delivery service