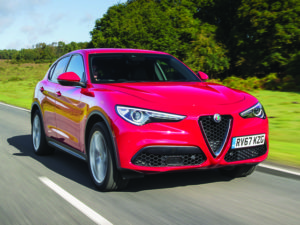 Back in 2014, Alfa Romeo revealed plans for an all-new generation of cars; light-weight, rear-wheel drive and focused on putting agility and driver enjoyment back into the brand. The Giulia spearheaded that relaunch last year, but an SUV is a prerequisite for premium brands, and the Stelvio offers an even bigger sales opportunity than its sedan stablemate.

You can groan at the idea of a marque once known for svelte coupes and featherweight sports sedans launching a bulky off-roader, but Alfa Romeo hasn’t neglected its brand identity here. Named after a winding mountain pass in Italy, it’s pitched somewhere between coupe-SUVs like the BMW X4, and the more practicality-led offers such as the Audi Q5. Its closest rivals are the Jaguar F-Pace and Porsche Macan.

So, like sports-tuned Alfas of old, the start point is low weight. The Stelvio gets a re-tuned version of the Giulia’s chassis, with a carbon fibre propshaft and plentiful use of aluminium in the drivertrains, suspension parts and bodywork to shed kilos. Kerb weight is easily best in class, closer to equivalent versions of the BMW X1 and Audi Q3 than larger SUVs, and split evenly between the front and rear axles.

It shows. This changes direction with the precision of a much smaller car, helped by a perfectly-weighted, linear steering setup and four-wheel drive which puts all the power to the rear wheels unless it’s needed elsewhere. Alfa’s eight-speed automatic works well too; avoiding needless up-shifting when you want the performance, and downshifting quickly when needed. It’s also managed this without jarring ride quality, or pitching from side to side on uneven roads.

Hiding that visually is trickier. The Stelvio looks like an upwardly-stretched hatchback from most angles. It’s also incredibly colour-sensitive, relying on bolder hues inside and out than most SUVs, and prone to looking grossly under-wheeled in its lower trim levels. The upshot, though, is that it’s quite large inside; the sporty styling hasn’t blunted passenger space, and boot capacity is competitive, extended over flat-folding rear seats and accessed via a standard-fit electric tailgate.

For the most part, it also feels really neatly executed inside, too. The large metal paddle shifters behind the sculpted steering wheel are incredibly tactile, and embossed leathers, wood inserts and deep-set instruments set it aside from the more conservatively-styled German SUVs. Unfortunately, so does the 8.8-inch infotainment system. It’s clunky to use, doesn’t have Android Auto or Apple CarPlay and the small screen isn’t helped by an inability to zoom out far enough to see where it’s taking you. Most rivals do this better.

From launch, the Stelvio gets a pair of 2.0-litre petrol engines, at 180hp or 280hp, and 2.2-litre diesels with 180hp or 210hp. Fleet demand is still likely to be weighted towards the latter, and it’s in line with most rivals at 127g/km CO2 for four-wheel drive versions, or 124g/km for the lower-powered engine with two-wheel drive. With a small price and fuel efficiency gap between the two, most buyers are likely to add four-wheel drive.

The higher-powered version was the only available to drive on launch. As in the Giulia, it’s a little grumbly from cold and when worked hard, but there’s an impressive lack of road and wind noise while cruising and plenty of pulling power without shifting through the gears to find it. Versions with all-wheel drive can also tow up to 2.3 tonnes, for those who need it.

So the Stelvio is a well-rounded first attempt at an SUV, capable of matching its key rivals in most areas while offering its own sense of style and driving dynamics. Not one for the purists, perhaps, but it should do well.

Alfa’s first off-roader was the Matta, built for the military in 1951.

There’s a clear business case here, and the Stelvio works well. Alfa’s hardest job may be marketing itself in an established segment where, as a brand, it’s had no presence before. Once people drive it, it may sell itself.