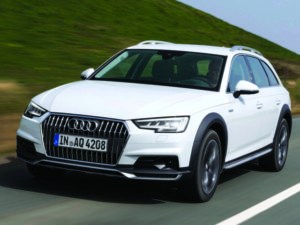 Almost 20 years since the first A6 Allroad, and eight since it joined the last A4 Avant range, Audi’s rugged lifestyle estate is a familiar product. One updated almost so subtly in its latest guise, that it would be easy to miss the technological strides now making this a much more useful business tool.

It’s starting from great foundations; the new A4 is larger but lighter than its predecessor, much better to drive and sets the standard for cabin materials in its class. There’s more room for passengers, a bigger boot with a one-metre square load floor, and a rear bench that folds in three sections using switches just inside the tailgate.

The Allroad Quattro is an SUV alternative for those with occasional off-road needs. Beneath its flared arches, larger-diameter wheels and raised suspension, which lifts the A4 34mm further from the ground, under-body cladding shields vulnerable parts from rocks and bumps, and an off-road mode sets the chassis and drivetrain to cope with low-grip surfaces. If that’s all a bit too aggressive and SUV-like, the protective arch-flares can be colour-coded, though that defeats the point.

It’s the 190hp diesel that’s the likely big-seller with fleets, though, consuming 4.9l/100km with either the six-speed manual or seven-speed DSG transmission. As in any other A4, it’s quick, incredibly quiet and emits barely any vibrations through the cabin, while there’s no noticeable loss of performance from the added weight and resistance of the all-wheel drive system. It can even use navigation data to pre-plan coasting opportunities to save fuel.

However, diesel versions aren’t available with the new part-time Quattro system yet. This monitors road conditions and driver behaviour to either pre-emptively engage four-wheel drive, or to respond to a sudden loss of grip. For the rest of the journey, it can separately disengage the rear differential and propshaft and run in two-wheel drive to save fuel, especially useful for economical highway cruising.

Instead, diesel engines are paired with a permanent Quattro system, which splits the power 60:40 in favour of the front but can also shift up to 85% to the rear, or 70% to the front, depending on the available grip. Paired with a lightweight new multi-link suspension setup, and wider front and rear tracks, the handling hasn’t been blunted by the raised ride height, nor has Audi needed to use overly firm springs and dampers to curb body roll.

All of that means the A4 Allroad Quattro builds on all of the standard car’s best points; it’s quiet, powerful and sure-footed on road, with the right hardware to keep drivers moving when conditions are more challenging. A familiar offer, but now better for businesses than it’s ever been.

What we think
Diesel versions would benefit from Audi’s more efficient Quattro system, but the Allroad is a versatile alternative to a brash SUV for drivers needing the extra traction.