Seat has released the first image of its seven-seater SUV, confirming it will be named ‘Tarraco’ when it launches later this year. 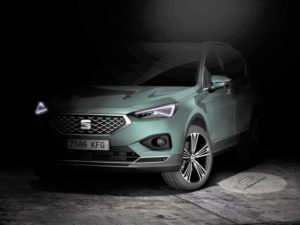 The Seat Tarraco adds a seven-seat flagship SUV to the range.

Positioned above the Arona and Ateca, the Tarraco completes a three-model SUV line-up which has played a large role in its recent sales growth.

Production of the Tarraco will take place in Germany, rather than alongside the Ateca and Skoda’s Karoq and Kodiaq SUVs in the Czech Republic. Similarities between the Ateca and Karoq imply the brand’s flagship SUV could share dimensions with the Kodiaq, as well as its line-up of petrol, diesel and diesel engines, and two and four-wheel drive.

In turn, this positions it not only against the Kodiaq, but in a group including the Nissan X-Trail, Peugeot 5008 SUV and Volkswagen Tiguan Allspace, as well as some crossover with the Land Rover Discovery Sport model range.

Tarraco (the historic name for Tarragona) also marks the 14th Spanish place name used for a Seat product, and follows a voting process covering 146,124 fans in 134 countries – of which 51,903 (35.5%) voted for the winning name.