Announced at ‘Madrid on the move by SEAT’, the company will begin offering carsharing services through Respiro. 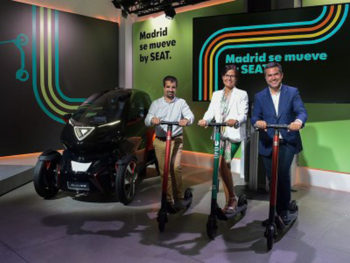 Other Spanish companies are also studying the possibility of corporate carsharing, including Cepsa

The carmaker is to present its sustainable mobility solutions in several Spanish cities. Services offered via Respiro come as SEAT wishes to move beyond vehicle manufacturing and onward in its strategy of becoming a mobility services provider, as the industry heads in the direction of a collaborative, shared, and sustainable economy, the company said.

Cuatrecasas is going to be the first company to use Respiro’s corporate carsharing service, which will operate in Madrid and Barcelona. Cuatrecases employees will have the free use of SEAT and Respiro vehicles to make urban commutes during work hours with other colleagues at no cost. All the vehicles will be powered with compressed natural gas (CNG) in order to minimise their environmental impact.

Arantxa Alonso, executive director of XMOBA, the SEAT subsidiary which owns Respiro, confirmed that “Respiro has over 12,000 users, proving that the demand is there, mainly in large cities such as Madrid and Barcelona. Our entry into corporate carsharing is a step forward in order to meet the needs of the public and provide them with cars by the minute, hour or day, in the centre of the city, at the dealership and now also at work.”

The introduction of corporate carsharing forms a part of SEAT’s urban mobility strategy,  which includes the introduction of electric mobility with vehicles such as the new SEAT Mii electric, the SEAT Minimó concept vehicle and the SEAT eXS KickScooter powered by Segway.

Since April 2019, SEAT and kicksharing start-up UFO have a partnership agreement whereby they are operating in Madrid, a city with now more than 13,000 users, as well as Málaga, where operations began in June and the number of users currently stands at 4,000. SEAT and UFO expect to expand the service to other cities nationally and internationally as it evolves, in cooperation with public administrations. Since its launch, the SEAT eXS KickScooter has enjoyed steady growth and sales have exceeded 8,000 units since it first went on sale in December 2018.

“Last-mile mobility is a fast-growing trend and the eXS is the first SEAT product designed specifically to enhance urban mobility. The collaboration with UFO enables us to understand and identify, and above all learn about new consumption patterns”, said SEAT Product Marketing director Lucas Casasnovas.