Nissan has issued the latest teaser image of its second-generation Juke compact SUV, which will debut new technologies, including ProPilot. 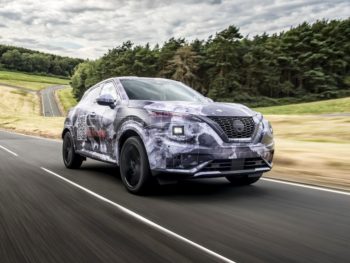 Currently teased in camouflage form, the second-gen Juke will be officially unveiled in early September

Receiving its official unveiling in early September and on sale towards the end of the year, the new Juke will become the third Nissan model to feature the package of semi-autonomous driving technologies, which forms part of the Nissan Intelligent Mobility vision.

Already on LEAF and Qashqai – and due to be added to the facelifted X-Trail later this year – ProPilot is one of a number of additions for the Juke, which has sold more than one million units since it debuted in 2010 and is credited with having set the benchmark in the compact SUV class.

The new model will also introduce a new look said to set a new standard in the class and claimed “fun to drive” performance while the switch to a new platform – the new Juke will be the first Renault-Nissan model to debut on the new CMF-B modular architecture – will also bring a larger footprint to provide extra space for the driver and passengers.