The true cost of congestion

Dave Moss looks at the growing problem of traffic congestion and what the future holds. 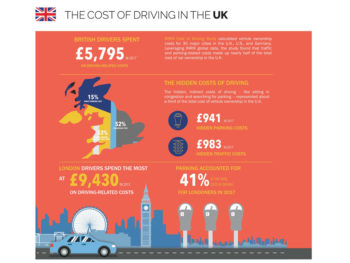 The cost of driving in the UK

Traffic congestion is almost certainly costing your company more than you think – in fuel, social and environmental costs, drivers’ time and more. Inrix is one of the world’s biggest transport data and analytics specialists and its 2017 ‘Global Traffic Scorecard’ charted traffic congestion in 1,360 cities, across 38 countries worldwide. The US emerged as the most congested developed country in the world, with drivers averaging 41 hours a year in peak hour traffic, at a cost of $1445 a driver – and nearly $305 billion overall.

The independent, UK-based Centre for Economics and Business Research (CEBR) recently undertook a major study for Inrix, analysing congestion costs in detail for the US, France, Germany and UK. The Centre’s head of transport economics, Ian Birch, points to some startling headlines. “Including the direct costs – drivers’ wasted time, plus fuel idling in gridlock – and indirect effects resulting from businesses passing on costs to consumers through higher prices, congestion cost these countries’ economies an estimated $200 billion in 2013. That’s $1,736 for each US household and over $2,000 a household in the UK, France and Germany. Without significant action, these costs are forecast to increase almost 50% to $291 billion by 2030.”

Stationary vehicles rack up wasted fuel costs to make fleet managers cry: the study calculated that, in 2013, across the US, France Germany and the UK alone, idling engines wasted almost six billion litres of fuel. But growing urban traffic congestion also brings pollution and emissions concerns for fleet managers and environmentally sensitive companies alike. The research estimated that idling engines released around 15.4 million tons of CO2 equivalent into the atmosphere across the four countries, a figure estimated to reach 17.9 million tons by 2030.

Nick Cohn, traffic expert at TomTom, a company providing solutions involving convergence of fleet management technology, satellite navigation systems and traffic data processing, believes cities themselves are best placed to develop the right responses to congestion problems: “Cities with major growth in car use, population and income are experiencing the most severe congestion,” he says. “Examples are Mexico City, Jakarta, various cities in China and Moscow. All, however, are very actively working to handle the challenge in new ways, with big investment in alternatives to single-occupancy car travel, including new rail and bus public transport. Car-sharing has also taken off and some cities – such as Moscow – have looked at policy changes combined with infrastructure investment.”

Whether building more roads really can solve congestion problems is a much discussed question. In recent years, cities from all over the world have successfully reduced jams through road improvements at particular bottlenecks, but opinions on such roadbuilding investments differ. 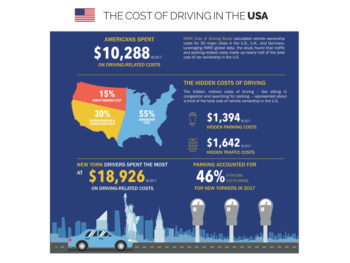 The cost of driving in the US

Professor Graham Cookson, chief economist and head of research at INRIX, believes new roads are an option – in some cases: “The causes of congestion are specific to the city, and often the actual road. But the imbalance between road supply and demand makes managing roadspace critical. That includes smoothing demand and avoiding peak hour trips through flexible and remote working, ride sharing – and encouraging efficient road use through wider adoption of road user pricing. Cities and highways agencies must also optimise the road network by embracing Intelligent Transport Solutions.”

Cohn believes road building isn’t the answer. “One lesson that has come up in cities all over the world is that adding lanes of asphalt is not going to eliminate congestion,” he says. “Studies going back as far as the 1960s have shown that new highway capacity tends to simply induce more travel. Collectively we’re learning we cannot simply build our way out of road congestion – we have to be smarter, and focus on multiple options for mobility.”

There’s an app for that

Technology-based solutions have been used for years by fleet operators to help manage vehicles, drivers and work-flow – helped lately by live route maps to avoid congestion. But the smartphone – and ever-advancing technology – has opened up new possibilities. “One of the benefits of digitally connected vehicles is the ability to coordinate the overall fleet, or large parts of it, in a way that maximises efficiency,” says Birch. “It should be possible to provide for mobility needs with fewer vehicles by using them more effectively. A new ‘mobility economy’ based on greater sharing may not be practical for vehicles with specialised functions, but there would be general fleet management benefits arising from the overall congestion reduction.”

This suggests traffic levels could fall as today’s ‘Mobility as a service’ (MaaS) applications become increasingly popular. Fred H Merrill, Professor of Economics at the Stanford Graduate School of Business in California, co-authored a major research paper including this topic, but is not convinced. “We are witnessing a lot of innovation and experimentation in the transportation space, from ride-hailing companies like Lyft and Uber, to various scooter and bike-sharing companies that have recently sprung up around the world. “I’m sceptical that by themselves they will be sufficient to relieve congestion to any meaningful extent. We expect the real relief to come from two complementary technologies – widespread road pricing, and convenient carpooling. Once road usage is costly during busy times, and it’s easy for people to ride in shared vehicles with multiple passengers per car, that will truly help relieve overall congestion.”

Discovering whether MaaS can effectively match fleet vehicle flexibility on business journeys in urban areas will take time, but Geraldine Priya, Frost and Sullivan’s team lead, new mobility, automotive and transportation, believes new mobility solutions could already match urban business transport demands. “A majority of service providers are currently looking to offer solutions for business travel, since its an area of growing concern for both city authorities and corporates,” she says. “A carpooling app could be used to reach the office, a car – or ride-sharing vehicle – to attend business meetings and a combination of shuttle/public transport to get home. “It’s definitely possible for an employee to not use a car, but success depends on the availability, cost and convenience of the complete integrated solution.”

The cost of cutting congestion

Whether growing MaaS takeup can reduce future traffic congestion remains to be seen, but researchers worldwide seem convinced that permanently reducing congestion will involve advanced technology – and widespread payment for urban road use. Prof Merrill sees telematics, traffic – and cash – becoming very closely related: “The key innovation I expect to dramatically change transportation is road pricing. Currently, it’s implemented mostly with toll gates, but with a shift to GPS-based location tracking, much more fine-grained road pricing will be possible, ensuring traffic flows freely in most locations at most times, reducing delays, pollution, fuel consumption and so on.”

CEBR’s Birch feels that technology will allow today’s road usage charges – completely or partly hidden in many regions as fuel taxes – to be replaced by direct charging for road access and use: “This offers the prospect of rationing road space based on willingness to pay rather than queuing – creating a competitive market.” He also feels technology will eventually deliver more than just congestion reduction: “The advent of automated, connected vehicles offers the possibility of very sophisticated road capacity management – like different pricing for alternative speed, route or timing options…”

Combining new modelling techniques with smart city technologies, the aim is to make journeys faster while reducing the environmental impact of urban transport. The project is working on identifying which journeys will contribute most to congestion, then seeking to avoid them in real time by offering city travellers a more efficient transport mode for that journey.

Instead of monitoring traffic flow on key routes, researchers are looking at individual trips within Lyon, France, to develop accurate traffic models for the city, with a goal of completely rethinking daily mobility management across an entire ‘smart’ urban area. However, focusing on such a vast picture while tracking individual travel patterns is a big challenge. Researchers are investigating new data-analysis methods, from which unique 3D flow and congestion maps have been developed, with modelling progressing on the basis that innovations such as autonomous vehicles and smart ride-sharing will be key future aspects of city-wide mobility. Overall the project aims to help individuals, companies and cities understand the potential and drawbacks of new transport methods – while recognising their part in more efficient, sustainable urban mobility.

Back to the future

Traffic congestion is estimated to cost EU member states €100 billion annually, with forecasts suggesting this could rise to €150 billion by 2050. Yet there are signs car use is slowing and congestion reducing in some cities such as London, Paris and Berlin.

CREATE is a just-completed European partnership programme set up to produce guidelines for reducing traffic congestion in the longer term, aimed at cities currently seeing rapid increases in car ownership and use. It’s been analysing how traffic growth has been slowed in these cities, looking at the politics involved and the policies and regulations applied. This work has been cross referenced to historic data stretching back 20 years, to discover how successful congestion reduction policies have been – where – and why.

The target was to offer the experiences and most successful anti-congestion strategies for evaluation by several east European cities, among them Bucharest, Adana, Skopje and Tallinn, where car ownership and traffic congestion are continuing to rise. It is hoped that benchmarks can be evolved from the project work to encourage wider use of alternative transport modes, providing more efficient movement of people and goods in Europe’s urban areas in future.

Be careful what you wish for…

According to partnership research just released by the World Economic Forum and Boston Consulting Group, the coming autonomous vehicle (AV) revolution will lead to major changes in congestion and traffic flow. Surveys and modelling work of Boston (US) city traffic to research the impact of AV’s found that, together, autonomous and traditional mobility-on-demand service vehicles will eventually account for 40% of trips within city limits, which could result in a decrease in vehicle numbers of around 15%.

However the study also found Mobility on Demand is likely to be a mixed blessing – with the remaining vehicles covering 16% more miles, leading to more city centre congestion and a 5.5% increase in travel times – all as a result of lower public transport system usage.

If the Boston experience is mirrored in cities around the world, for businesses unable to make use of Mobility on Demand solutions in urban areas, future company vehicle use could become expensive. The study found Boston will need less than half as many parking spaces, and suggests local governments are best placed to influence congestion, with the greatest effects likely from pricing schemes which actively discourage single-occupancy vehicles.