The Toyota Yaris has chalked up a five-star rating by Euro NCAP after becoming the first car to undergo the revamped testing programme. 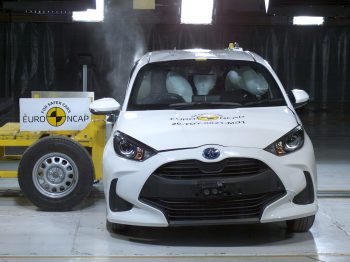 Marking a return to testing following the pandemic, the Yaris was the first car to undergo the new frontal offset test, which replaces the one previously used since the programme started in 1997.

The test has been overhauled to feature a counter-measure for injuries in far-side impacts. It uses a mobile deformable barrier that assesses the protection a car offers its occupants as well as the risks it poses to the car it has crashed into.

The Yaris performed well in the test, helped by two centre-mounted airbags that inflate in side impacts and limit passengers being flung to the opposite side of the vehicle and potentially hitting other occupants.

Matthew Avery, director of research, at Euro NCAP member Thatcham Research, said: “As drivers, we don’t tend to consider the dangers that occupants – usually family or friends – can present to one another during a collision. The inclusion of centre airbags to offer compartmentalised protection, and avoid or reduce contact between occupants, is a genuinely encouraging development for crash safety.”

The Yaris was also rated highly for its use of advanced crash avoidance technology: the latest generation of Toyota Safety Sense now can stop the vehicle during turning to avoid a crash with oncoming traffic, and the Yaris scored an 85% rating for safety assist.

The return to testing at Euro NCAP also saw two cars tested against the 2019 protocols. Both the Audi e-tron Sportback and the new hybrid version of the Renault Clio scored five stars.