The UK must rapidly accelerate the deployment of gigafactories and new battery technology development to ensure domestic car production is not threatened. 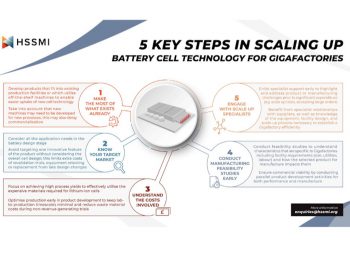 That’s according to a report published today by expert manufacturing consultancy HSSMI which says current plans will lead to a shortfall of more than 95GWh in battery production by 2040.
Its research finds that by this date – a decade after the ICE ban on new cars and vans takes effect – there will be a need for 140 GWh in battery cell capacity, equivalent to five gigafactories.

But there is currently only 3GWh of production in the UK and, by 2030, just a further 45GWh planned.

The majority of global battery production – roughly 70% – is currently in Asia, which benefits from accessibility to abundant natural resources, as well as government-driven support for high-volume manufacturing and local demand for electric vehicles.

In contrast, the UK faces challenges including lack of skilled technicians on cell manufacturing processes and availability of critical raw materials, as well as high production costs.

Axel Bindel, executive director, HSSMI, said: “Action to ramp up capacity needs to be taken within the coming year. In the most detrimental scenario, UK-based automotive OEMs would seek to leave the country. This would adversely affect the entire economy, not just the automotive sector, as it accounts for 14.4% (worth £44bn) of total UK exports of goods”

HSSMI adds that investing in more battery plants and bringing them as close as possible to car production – reducing supply chain challenges – can alleviate many of the UK’s issues, but the industry needs to act fast.

Robin Foster, battery solutions lead at HSSMI, said: “Typically, it could take a gigafactory up to five years from an initial idea to become fully operational. Demand for cell manufacturing, however, is expected to surge in the next four to five years.”

At the moment, the Envision AESC facility in Sunderland is the only UK facility manufacturing lithium-ion cells at scale (2-3GWh). AMTE Power and BritishVolt have both announced plans for UK-based Gigafactories, which will help supply local products to the UK automotive sector.

But while the Government is starting to make funds available for the industry, HSSMI says more collaboration potentially needed to steer the country to success.

This includes decision-making and planning in the development of new battery technologies and its acceleration onto the market.

Foster continued: “It is not enough to have one or the other – we can’t focus just on gigafactory creation without being strategic about new technologies. So in parallel, the UK must exploit and commercialise the wealth of new battery technology developed locally. The typical time, however, for new technology to become commercially ready can be 10 years from lab to high-volume production. Engagement with a scale up specialist can provide feedback early on for commercial viability.”