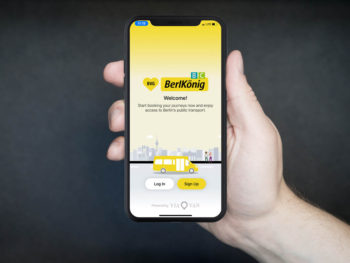 Titled “BerlKönig BC”, the new service is designed to provide a first-and-last mile connection to U-Bahn railway stations for passengers, which the company says are traditionally underserved by fixed route services. Passengers will be able to pre-book rides directly through the BerlKönig BC mobile app up to one month in advance, and the fleet includes wheelchair accessible vehicles.

Chris Snyder, CEO of ViaVan, said: “This service is an exciting example of how public transportation and technology can work together to make a city smarter, extend access to public transit, and reduce single-occupancy vehicle trips.”

BerlKönig BC follows the BerlKönig service by ViaVan and BVG, which launched in central Berlin in September 2018. Operating in central Berlin, the BerlKönig has delivered more than 750,000 rides in its first 10 months. More than 80% of BerlKönig rides have two or more passengers in the vehicle at the same time, up to 97% at peak times.

ViaVan powers a similar first-and-last mile service in the UK with bus operator Arriva in the rural town of Sittingbourne, with a high number of commuters who rely on a nearby train line. Launched in 2018, ArrivaClick has seen more than 50% of its passengers switch from private vehicle use to shared transport to connect to the commuter train line.

ViaVan and Arriva have also launched ArrivaClick in Liverpool and Leicester as microtransit services with connections to public transit. In London, ViaVan recently partnered with Transport for London (TfL) and Go-Ahead for a demand-responsive bus pilot aimed at reducing private vehicle use for access to public transit in the borough of Sutton on the outskirts of the city.

Globally, ViaVan and parent company Via, have been tapped by cities and transportation players around the world to help re-engineer public transit from a regulated system of rigid routes and schedules to a fully dynamic, on-demand network. Via and ViaVan now have more than 80 launched and pending deployments in nearly 20 countries, providing more than 60 million rides to date.