By Natalie Middleton / 4 years ago / Interviews / No Comments

The Volkswagen Group is to form a joint venture with Algerian sales partner SOVAC to assemble vehicles in the local market. 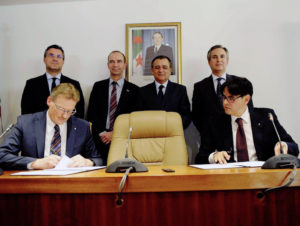 The contract for vehicle assembly was signed in the presence of the Algerian Minister of Industry Abdessellam Bouchouareb.

The new site is being constructed in Relizane, 220km to the west of Algiers.

Production will begin from spring 2017, with a daily capacity to produce over 100 vehicles covering the Volkswagen Golf and Caddy, SEAT Ibiza and Skoda Octavia.

The Volkswagen Group holds a minority stake in the joint venture. SOVAC has been a sales partner for the Volkswagen, Volkswagen Commercial Vehicles, Audi, SEAT, ŠKODA and Porsche brands since 2001.

Dr Josef Baumert, Member of the Volkswagen Commercial Vehicles Board of Management responsible for Production and Logistics, said: “The Volkswagen Group opted for participation in SOVAC Production S.P.A as we have co-operated successfully with our sales partner SOVAC for many years. For us, this is a logical step towards increasing vehicle sales in Algeria in the long term.”

The VW Group’s dealership network in Algeria covers over 100 facilities. In 2015, the group delivered 30,000 new vehicles to customers via SOVAC.