Audi has unveiled its Q8 coupe-cum-SUV, bringing a flagship to its Q range to rival models such as the BMW X6, Range Rover Sport and Mercedes-Benz GLE. 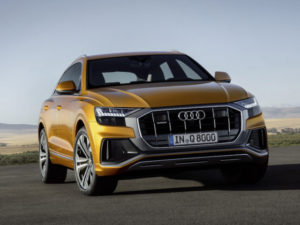 Based on the Q8 Sport concept shown at the 2017 Geneva Motor Show, the Q8 uses the same platform as the Q7 but is wider, shorter and lower than its sister model – giving it a more aggressive stance – and only comes with five seats.

Launching this summer in Europe, the Q8 will be offered with just one engine at first – a six-cylinder 286hp 3.0 TDI with a 48V mild hybrid system that provides a coasting function, married up to quattro all-wheel drive. The engine is capable of 100kph in 6.3 seconds and a 232kph top speed.

Depending on the market, the Q8 gets adaptive air suspension sport as standard with a sport setup. It can be adjusted to four modes with the Audi drive select dynamic handling system, varying the ride height of the body by up to 90mm. All-wheel steering – which can turn the rear wheels by up to 5 degrees – is available.

Driver assistance features on offer include adaptive cruise assist, efficiency assist, crossing assist, lane change warning, kerb warning and 360-degree camera. From early 2019, drivers can also opt for the remote garage pilot, which independently steers the Q8 into and out of a garage while monitored by the driver, and the remote parking pilot, which works in a similar way.