By Natalie Middleton / 2 months ago / Uncategorised / No Comments

Bevan Group has entered the electric vehicle conversion and bodybuilding arena with the launch of a Nissan e-NV200 conversion that offers up to twice the load volume of the standard model. 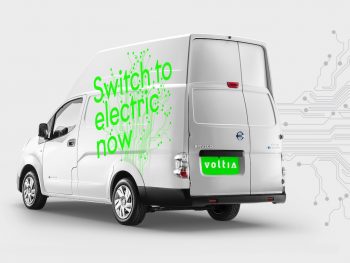 The group has signed a landmark partnership agreement with conversion specialist Voltia, providing it with a licence to assemble and market Voltia’s zero-emission Nissan-based vehicle in Great Britain and Ireland.

Voltia’s conversion features walk-in rear doors and offers a load volume of up to 8m3, nearly twice that of Nissan’s standard e-NV200 although a variant with 6m3 cargo area is also available. The conversion has a 580kg payload capacity and a range of up to 124 miles.

The tie-up with Slovakia-based Voltia – which has already provided hundreds of converted Nissan e-NV200s across the Continent – will help cut the costs associated with importing finished vans to the UK while also countering potential Brexit issues.

The new arrangement means that not only can vehicles now be offered at prices said to be significantly more competitive than previously possible, but Bevan Group added that Voltia will also benefit from its marketing expertise and knowledge of the market in Britain and Ireland. And while customers already benefit from the chassis manufacturer’s standard warranty, Bevan will back the bodywork with its own five-year cover.

Voltia CEO Juraj Ulehla said of the deal: “Not only will local production and distribution of our electric vans be more environmentally-friendly, thereby supporting British cities in their endeavours to reduce emissions, but this partnership will also enable us to smooth the process of delivery to the UK market, even post-Brexit. It’s a ‘win-win situation’ and we’re confident customers will appreciate the benefits.”

While Bevan Group will initially convert Nissan chassis using imported panels and components supplied by Voltia – with work starting later this month – it plans to recruit an EV-dedicated workforce and cut costs further by manufacturing all of the required parts ‘in-house’.

Bevan Group managing director Anthony Bevan continued: “Important though it is, the launch of our new partnership with Voltia represents just the first phase of a major strategy under which we intend to establish Bevan Group as the UK’s number one provider of conversion and bodybuilding services for electric vehicles. We’ll have more news very soon, so watch this space!”

A fleet of demonstration vehicles is now available for trial by potential customers.