Toyota Europe has published initial CO2 data for the forthcoming Yaris, which will introduce latest-generation hybrid technology when it launches this coming autumn. 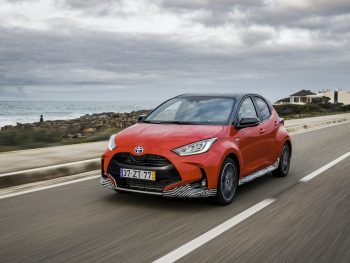 The fourth-gen Yaris launches this autumn

Marking the first application of the Toyota New Global Architecture modular platform programme in a compact car – with the GA-B platform to also be used for a new compact SUV – the Yaris is shorter, wider and lower than the current model and uses intelligent packaging to maximise interior space, although figures are yet to be released.

As well as introducing a bolder design and higher-quality materials, including a Yaris-first of a soft-touch instrument panel, it also heralds the first use of the new TNGA three-cylinder, fourth-generation hybrid system.

The new Yaris will also be available with 1.5 and 1.0-litre three-cylinder petrol engines in selected markets. More details of these powertrains will be released at a later date.

Specifications are yet to be confirmed but technology will include a central Toyota Touch screen, a TFT multi-information display in the instrument binnacle and a 10-inch colour head-up display, which projects key driving data and warnings such as navigation prompts and speed limits onto the windscreen within the driver’s field of view. Other features on offer include a wireless charger designed to accommodate the latest generation of smartphones, a heated steering wheel and special ambient cabin lighting.

Advanced driver assistance systems include full speed-range intelligent adaptive cruise control and lane trace assist system as found on recently launched Toyota models such as Corolla. The Yaris is also claimed to be the first car in the compact segment to introduce a centre airbag.

The new Yaris will continue to be manufactured at the Toyota Motor Manufacturing France facility – alongside the forthcoming yet-to-be-named compact SUV – with full economy, pricing and specification data expected this summer.