By Natalie Middleton / 2 weeks ago / Uncategorised / No Comments

LEVC has started work on the first prototypes of its new range-extender van ahead of the vehicle’s debut at this April’s CV show and its launch in Q4. 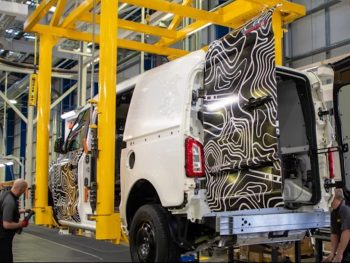 Prototypes of LEVC’s range-extending van are now being built at its Coventry, England factory ahead of the model’s launch in Q4

Revealed last September at an event in Frankfurt, the van is now being built in prototype form at LEVC’s factory in Ansty, Coventry – alongside the same line as the TX taxi that also features the e-City range-extending technology. It’s expected to offer an electric range of 130km (80 miles) and a combined petrol and EV range of over 600km (370 miles), and will help target growing concerns over a current lack of alternatively fuelled vans on the market.

The prototypes will be deployed as test vehicles and undergo a strict development and homologation programme including hot and cold climate testing, durability and crash testing.

The van is constructed using the same lightweight aluminium architecture as its TX electric taxi – said to be 30% lighter than a conventional steel body – and offers a turning circle of just 10.1m; a key attraction for operators. It’s being positioned as a cleaner alternative to one-tonne medium-sized diesel vans for ‘distribution-to-door’ – not just last-mile – service, providing the critical link between out-of-town depots and city centres.

In particular, it’s aimed at those who travel 100 miles a day, bringing cost savings in fuel and servicing over conventional ICE vans while also eliminating range anxiety seen with full electric vehicles.

LEVC is also continuing its pledge that the van will offer class-leading total cost of ownership.​

Joerg Hofmann, LEVC’s CEO, commented: “Prototype stage is an important milestone in our new electric van’s development process as we stay on track towards full production in Q4. This new van satisfies the growing demand zero-emissions vehicles in the one-tonne segment, currently dominated by diesel products, and combines this with extended mileage capability to totally eliminate any range-anxiety. It’s an intelligent green mobility solution for any commercial vehicle operator.”